My Coastal rules "Release the Hounds" has been dormant for a year now.  ( Several people have asked about them on TMP and I have chickened out and not answered.)  I was done with them but couldn't get around to publishing them.  Something was bothering me.  I was finally honest with myself; the end game dragged.  Don't get me wrong, no worse than other sets I have played but there were still too many misses, too many calculations when the shots hit.  I thought I had streamlined it but apparently not enough.  I loved the searching, initial contact and the command and control.  But once you decided to either hammer away or chase it dragged.
Now part of this is my understanding of naval combat.  Despite first hand accounts hits are rare and while you can have the catastrophic hit, you still wear down the enemy through attrition.  So I want the odd critical hit with a massive fire or flooding but I have to account for attritional damage.  I also hate hull boxes and the like; minimal bookkeeping!
I had a eureka moment while reading a book about the Italian invasion of Ethiopia. ( Go figure!)  I still keep a familiar "to hit" sequence since it is quick but once you hit calculations are non existent.  If you don't hit, which happens often, you are done; either way it has been much quicker and has not dragged in my 3 mini playtests.   So now here is my report of a full blown game complete with unknown forces for the german player.   I didn't add characters because I am still concentrating on mechanics of the rules; mainly the combat routine, as I am happy with everything else.

1944 Off the Coast of Occupied Holland.   Visibility 3Kyrds Sea state 2 ( didn't want to confuse things even though I rolled a sea state 3) 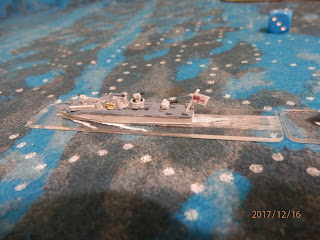 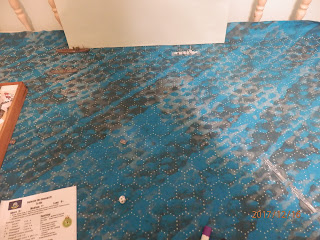 Starting out each turn is approximately 2 minutes and each hex is 200 yards.  British enter bottom right.  First blind in range is middle of the board. 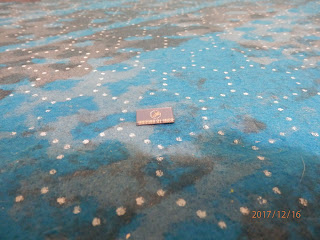 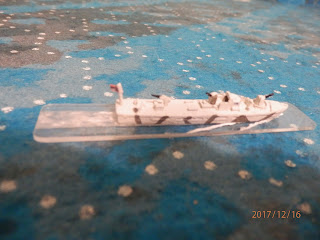 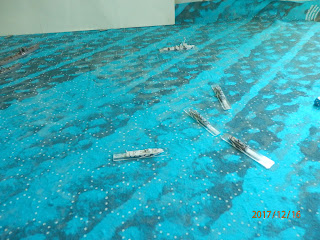 British engage the R-Boat.   Lead MTB rolls independent action and decides to take out the minesweeper.  ( not a bad thought actually)  Merchantmen not sighted yet. 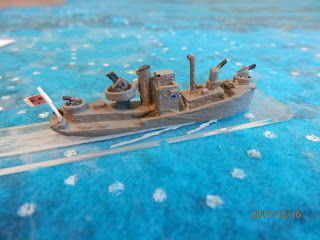 2nd "C" blind on the starboard side gets upgraded and revels a KFK.  Slow but better armed than the early R-boats. 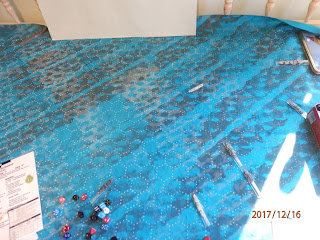 At this point; 10 minutes into the engagement the first R-boat is wreaked.  The KFK is moving up to support.  A r-boat from the far side is ready to engage.  #2 and 3 boats are moving forward looking for merchants.  #2 has taken some damage and it's forward 2 pounder is disabled.  #1 is ready to launch torpedoes at the minesweeper.  He has missed the 4 inch guns so far. 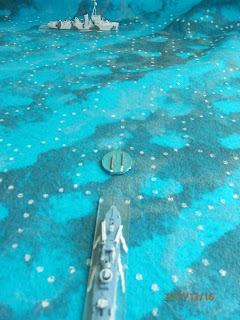 MTB #1 releases 2 fish at the Minesweeper.  They go undetected but miss! 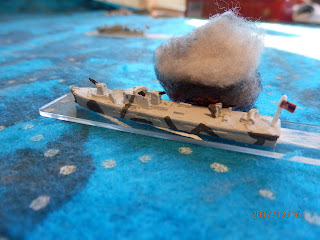 A lucky hit starts a fire on one of the Rahm boats. 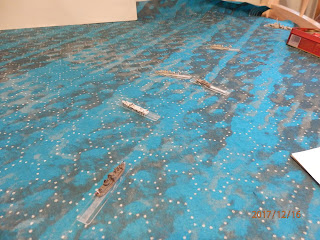 16 minutes into the action.  #2 and 3 have sighted the merchantman and are headed their way.  The German escorts are trying to stop them.  #1 is now turning away from teh minesweeper. 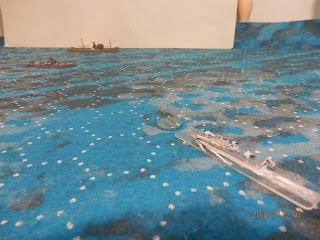 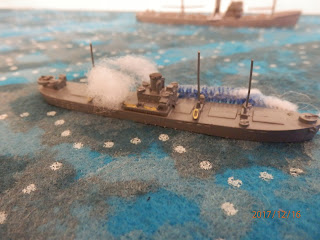 A glancing blow!  heavy damage and flooding only!  Still aircraft should find her in the morning. 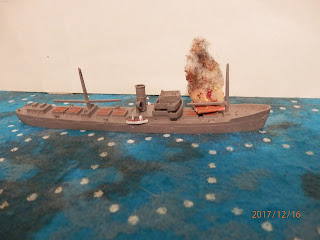 The Elco from 2K yrds out does better.  Wreaked with flooding and a fire.  Damage control puts out the fire but not the flooding.  She sinks an hour later! 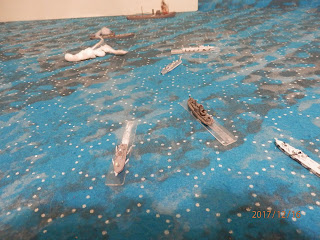 Heading for home!   The elco turns on the speed.   #2 is caught and shredded by multiple 20mm guns from various ships.  She stops and will eventually sink.  #1 ( not pictured) has heavy damage and a fire from a near miss from a 4 inch shell.  She manages to put out the fire and sneak away.

More importantly the game played smooth the whole time and didn't bog down.  Combat might be a tad deadly but for small boats I think that is okay.   Will need some more playtesting and will have to have some Destroyer action to see how it scales up but so far so good.