There has been some spirited discussion about patrol scenarios and  recon missions over on TMP.  Someone asked, " Why does no one play patrol scenarios?"  I love patrol scenarios though I admit Platoon Forward patrols are set up to be "fighting" patrols.  The recon scenario has you scouting for enemy positions and honestly I find it boring.  You find them and beat feet.   I included it because it was an important task and wanted Platoon Forward to be a complete campaign. ( I normally substitute "meeting engagement" for recon when I roll it.)  Screening of engineering activities ( checking out a ford or bridge for example) is done by the screening mission.  I actually like this mission as the platoon has to protect the engineers while they do their thing but sometimes they have to fight it out as well.  I got to thinking, could I come up with a recon patrol scenario that would be fun?
The following action is taken from chapter V from Jonathan Lachman's book Wrong Place; Wrong Time.  My view of WW III .  Published by Tasche books, Koln Germany, 1987.  All rights reserved by Herr Lachman and used with his kind permission.  His last chapter can be found here:
http://platoonforward.blogspot.com/2018/06/world-war-iii-chapter-iv.html

After the retreat from Krinholden we moved back to Hamburg.  We were exhausted and Ivan must have been too because for 12 hours no one bothered us!  I actually slept for 5 hours.  Our platoon was in reserve but the company was not in contact.  Turns out the senior officers didn't know exactly where Ivan was.  Clearly, it is intolerable for a German General to not know exactly what the enemy is up to.  Lt Weiss called for myself and Sgt Blaum to meet him in a small store he had commandeered as his CP.  I didn't know what to expect but knew it wouldn't be good.   The LT started right in, " We have lost contact with the enemy.  Despite all our high tech airplanes and American satellites [ 1986 remember] we don't know if Ivan is infiltrating, resting or bypassing.  Each of you is to go to a different suburb and snoop around.  If you find anything we have mortars standing by.  If it is just a screen you can press on otherwise just beat feet and get back here." 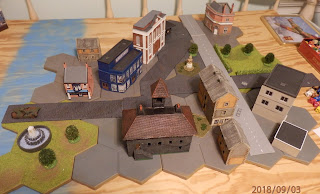 Suburb of Hamburg.   Sgt Lachman's Marder left.  Rathaus center.  Goal is to snoop board and exit by bank up top.  Rolled for blinds and they enter right and right bottom. 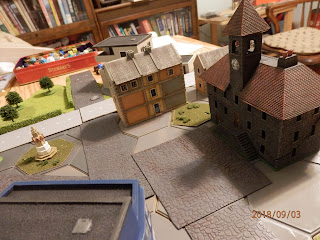 View of the Rathaus. 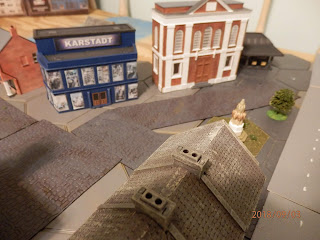 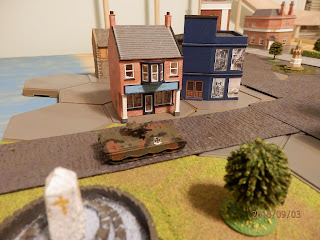 The Marder enters past the fountain. 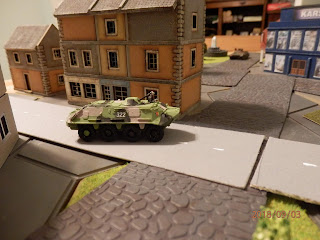 An East German (NVA) BTR-60 also enters scouting ahead.  ( Have to work the opfor tables I think.)

The two sides meet when the NVA round the corner.  Shots miss as both sides scramble back to cover. 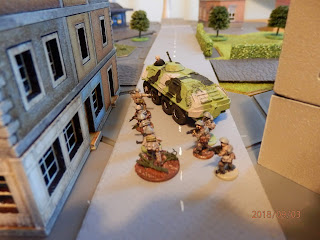 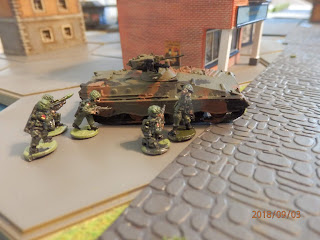 We saw a funky BTR ahead; enemy but German!   I shouted to pull back.  We would unload and see what was up.  My first instinct was to race across the square to the Rathaus to outflank them but I remembered two things.  First, I didn't know what was following the BTR.  Second, my mission was to see what all they had and then beat feet.  I chose to move into the Karstadt and view across the square and the road.  I positioned the marder by the fountain where it could get a milan shot off if a tank rolled around the corner. 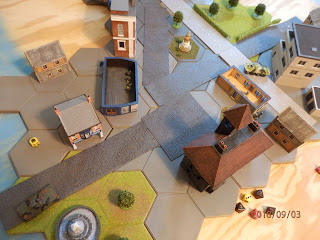 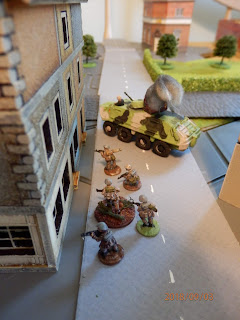 Rotterman takes out the BTR with his panzerfaust.  The squad's fire causes the NVA to back out of the building. But the East German Sgt had sent his RPG team to find the Marder... 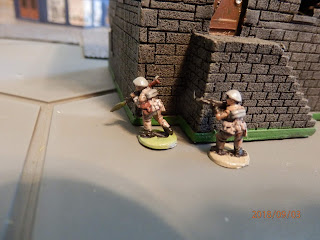 We have a shot comrade! 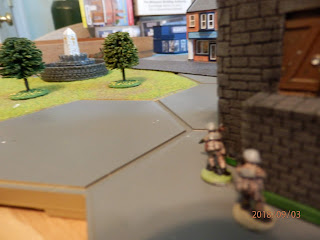 You call that a shot?  I can't even see it behind the fountain and tree?  Okay, hurry up and fire so we can get out of here! 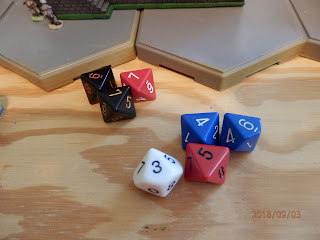 I can't believe it!!!  In FoF you roll opposed die and the defender blocks attacking die that hit.  Gamey but I love doing it.  The RPG rolls 3d8 shown top.  The defending Marder had a side armor of 2d8 to which I changed to 2d10 for the hull down plus 1 d8 for moving plus 1 d8 for the tree.  I felt Sgt Lachman's track was quite safe.  Then I rolled the 4 dice below in the picture.  You have to be kidding me!!!  I blocked only the NVA "6".  What a shot comrade!  Mercifully I rolled low on the damage table and broke the track; whew! 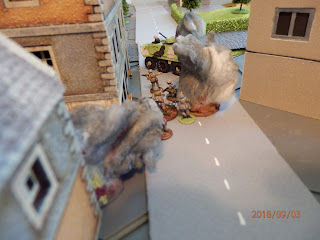 Artillery falls around the rowhouses.    Unbeknownst to Sgt Lachman a NVA soldier is critically wounded.

After the mortars fired.  there was nothing from the rowhouses.  I sent two men... 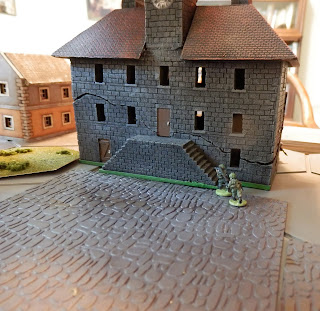 across the square while we covered them and they made it.  Just then an RPG hit the Marder from behind the Rathaus.  ?!?!

They charged into the Rathaus and I came... 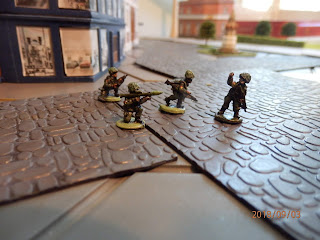 Meanwhile, another German NCO has a quandary. 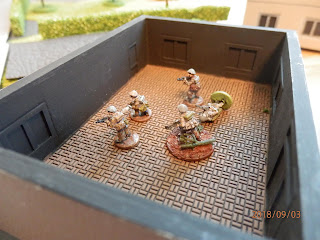 Sgt Schwartz was having a bad day.  He was to find the Capitalist MLR and instead he was without a track and had one man bleeding to death.  His RPG team was gone and missing.  He decided to take Helms and go find them quickly.  He couldn't leave them behind to face the wrath of Westies.  "If I am not back in 8 minutes make your way back without us." 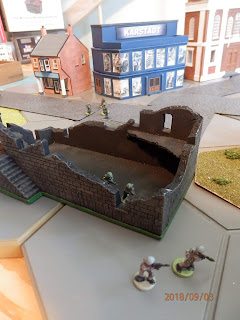 The two NVA soldiers flash by the Rathaus before the Westies can get a shot! 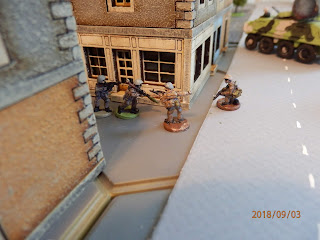 Sgt Schwartz is relieved to see his team!  Schnell!  We must leave quickly!


" We never did see the RPG team.  We moved up cautiously on the rowhouse but the NVA had left.  Mercifully the RPG had only broke a track whcih we were able to quickly fix and we high tailed it home.  So ended my first brush with the East Germans."

Great game.  I declared it a win for Sgt Lachman as he had accomplished his mission; sustaining only 1 lightly wounded and destroying a BTR-60.  Post game the squad has become even more enamored with his leadership and will now follow him anywhere.  Their morale stays at 10 and his leadership increases to Gr II.  ( above average.)
I enjoyed the recon aspect.  It was still a meeting engagement but the goal was to see all one could and then leave.  A subtle difference when playing.  I do need to work on the tables a little for WW III I think. 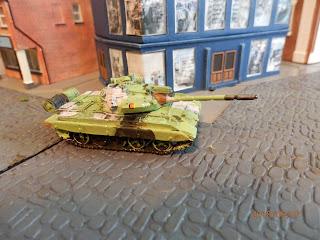 PS     Almost finished but the East Germans are getting some help!!!