Happy New Year!  Had some time off with family so gaming was intermediate at best.  Hope everyone had a great holiday season.  Was blessed to get some 1/300 scale ships for Cruel Seas, Tanks the Modern Game and some terrain pieces from Battlefront.  I played Tanks and was surprised that it included  the base cards for all the vehicles, not just the M1 and T-64.  Will review that at a later date.
For today will continue with Cruel Seas, Flotilla Forward and my new 1/300 ships.  I am still enamored with Cruel Seas and most of my changes to the rules.  I think I have the damage model down, still playing with iniative, have just added FOW cards and am 80% there with critical hits.  With FF just need to playtest the scenarios.   I love the scale of the ships and they work fine on the table; not too big.  Think I will keep my 1/1250 DDs though in case I want to run destroyer battles in the slot.
So today we played "patrol" with my S boat squadron while I paint up some more ships.  Patrol in the channel was a bit unusual but is fun to play as it is essentially an encounter where you are not trying to avoid or protect anything.

After some adjustments to the engines of his boat Schwartzman needed to test it out to make sure it would work fine when he needed it.  As commander of the element of 6 boats he had the latitude to decide he was going for a cruise tonight.  He needed a wingman so he took Rudorffer.   He was a reasonable fellow and it paid to keep on his good side since his uncle was some muckity muck in the Nazi party. 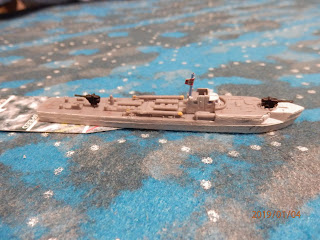 4 miles off the coast Schwartzmann sees a small MTB 1700 yards ahead to port.  He orders echelon left and opens fire with his front 20mm. 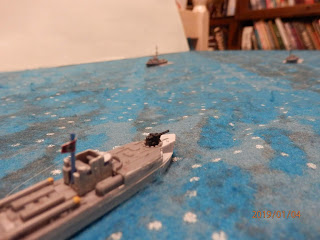 Klaus only sees the port MTB. 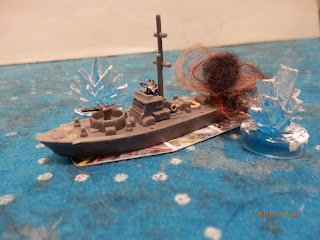 The surprised MGB is in trouble with an engine hit.  { I don't use the  plume rule in the rules.
the splashes are there for color.} 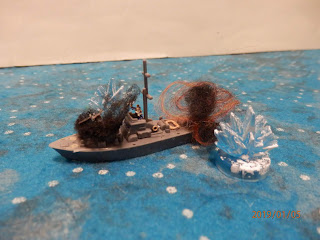 Rudorffer's guns join in and finish the job!

At this point Schwartzmann's is fired at by several other MTBs and a swirling battle ensures. 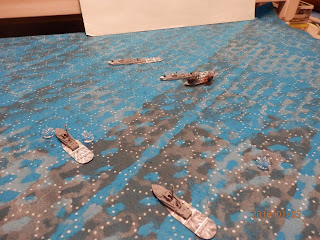 The British are outgunned but determined. 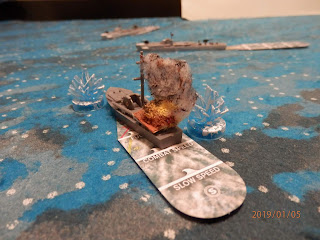 Suddenly a flash of flame shoots up on one of the MTBs.   [ A torpedo exploded] 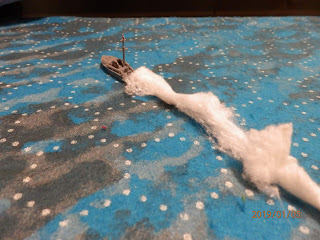 She manages to make her way south under the cover of smoke.  [ 2 hit points left.] 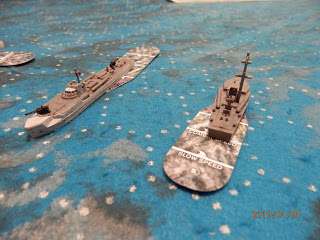 After about 15 minutes of battle Schwartzman is content to let the last MTB escape as he also wants to be back in port before dawn.  He gives the MTB a parting shot with his guns at 200 yards. 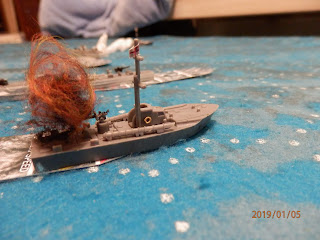 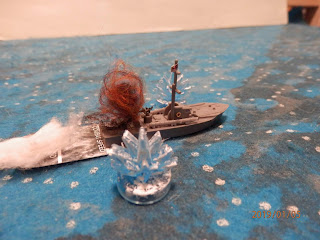 The british captain [ interesting that we call a 23 yo LT "captain" but he certainly had a weighty decision] had a difficult decision to make.  Slow his boat down to fight the fire [ not guaranteed in my rules] or run it and have his boat slowly consumed in flames.  He decided to run it while making smoke but after 5 minutes it was clear the fire was going to win.  Realizing what would happen he slowed his boat... 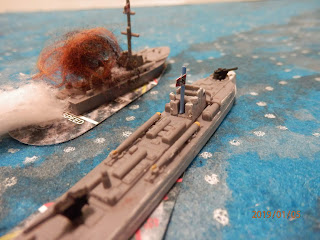 OLTzur See Schwartzman chased the MTB for 5 minutes gaining ground as the British tried to fight the blaze enveloping their ship.  As he pulled to within a 100 yards he hailed to the British to surrender.  Much to his amazement they declined his offer but did request a fire extinguisher.  [ For those of you familiar with my rules I used the AKOT and set the odds at very unlikely as the British had 7 hps left.]
" The British are so stupid" thought Schwartzmann.   Fire! he told his crew.  All guns barked as the ship was further shredded.  [ now the odds became very likely1] 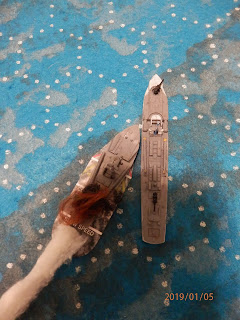 The british officer waved a white piece of cloth so Schwartzman moved up to the bow and took the British survivors off not without some risk to himself.      It had been quite an evening!


Great battle with a surprising ending.   The whole thing took just over and hour.    Post battle the element's rep doesn't go up. [ bad roll] but Klaus' ship advances to veteran status!  Also Fregattkapatian Froshler promises Klaus extra support for his next mission.  Guess I need to get some more ships painted up!

Posted by FlightDoc at 3:14 PM