Romanians over the Kuban

Flotilla Forward continues to move ahead but it has slowed down because it is october and that means playoff baseball.  A bonus for me is my favorite team, the Nationals, are in the playoffs.  Fingers crossed.
Decided to do something different last week after reading about Jack's air campaign in the Pacific.  Decided to do a Bag the Hun mission.  I had just finished painting up 2 seibel ferries from warlord's sale in preparation for a game with my brother and dad so decided to use my Romanian ME 109 squadron to do a CAP mission over the Kuban river.  [ You can see I am fixated on the Romanian air force as well as their navy!]  This is an interesting squadron as they have flown 8 mission already.  Their CO was sacked after the 3rd mission for not being aggressive enough and the XO [SLt Florescu] was fleeted up to temporary command.  After performing well this was made permanent along with a promotion to Capt.  Despite what you might think this is a good squadron with 13 kills against 5 losses.  They currently only have 5 mission ready aircraft with 2 in the shop. SLt Bernad is the maintenance officer and he works what miracles he can.

Capt Florescus left the operations hut to go brief the squadron.  He had just left LtCol Ulsei in a reasonably good mood.  They were to fly CAP over the Kubian river where the germans were moving supplies down towards the Black seas beachhead the russians had created 3 days ago.  He would take a schwarm and mulled over in his head who should accompany him.  The logical choice to lead the other element was Adj Sef Miron.  He was the senior NCO of the squadron, had 2 kills and was a great pilot.  Unfortunately, he was shot down 2 days ago and just walked into the squadron last night.  The flight surgeon had not cleared him for combat yet.  His XO was too green having arrived 2 weeks ago.  Lt Marulis, the leading scorer in the squadron with 4 kills, had just made a dead stick landing earlier today.  That left 2 NCOs Burileanu and Manoliu.  Both had been with the squadron since they had converted to the ME 109 and had flown primarily as wingmen.  He would ask his senior NCO for his recommendation.  Everyone else in the squadron was just too green. 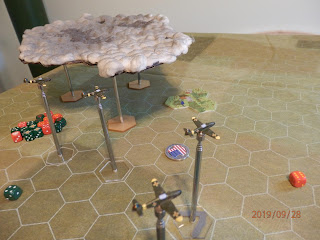 The schwarm over the Kubian

I picked CAP mission and rolled up intercept bombers.  ( I actually rolled up operational bombers but I only have early war soviets.  I have been meaning to get some B-25s in Russian colors.)  So I rolled up 6 Sturmovik escorted by 4 LA-5s.   ( 1 of the LA-5s is a brand new LA-5 FN which for me gives is slightly faster speed.)    Despite being a veteran and being on CAP Florescu rolled badly on the intercept and ended up being significantly behind the soviets when he spotted them. 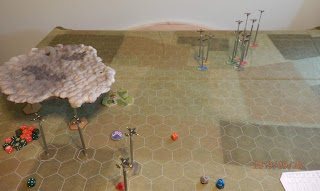 Capt Florescu told teh NCO element to get the bombers and he would handle the fighters. 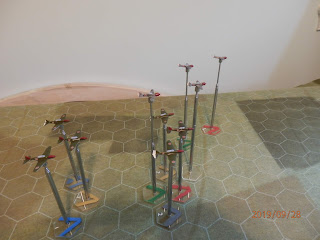 Unfortunately they are seen by Ivan at a distance and the escorts circle back. 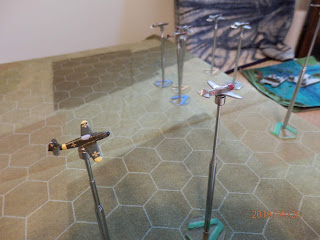 Florescu finds a russian fighter off alone and bores in.   ( Green pilot fails to keep formation.)
He is rewarded by the plane suddenly spiraling down awkwardly.   His 4th kill! 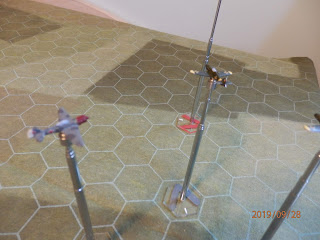 However, before the elation of his 4th kill has time to sink in bullets rattle his plane from the left side! 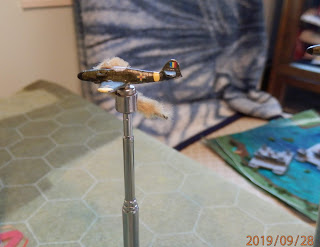 A quick turn to port loses the russian but Moraru comes over the headset telling him his plane is trailing fluid at an alarming rate.  A scan of the instruments shows his fuel dropping fast.  His fuel line must be cut.  He has no choice but to leave his very green wingman and the NCOs and head back towards base. 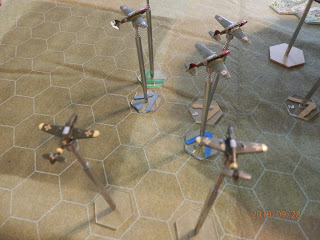 Meanwhile the 2 NCOs bore in.  But a Sturmovik is very hard to bring down. 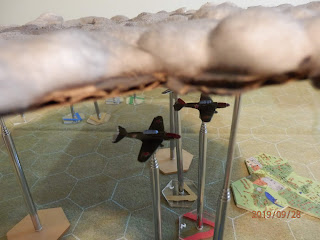 Then the wiley russians hide in the clouds! 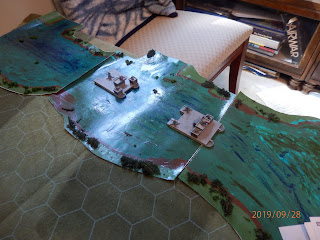 Meanwhile, floating down the kuban river... 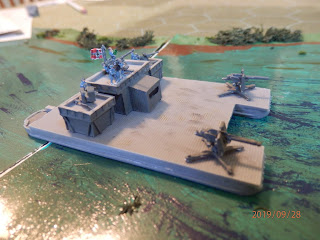 Very cool looking ferries!  Wonder where the 88 crews are?

Jack, these are the 29 cent rivers I told you about last year.  Not as nice as the Wargamer's terrain but waaay cheaper. 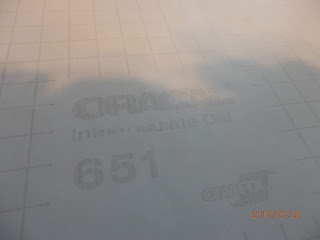 They are some type of shelving paper.  Here is a shot of the back.  I bought it at Michael s.

Back to the battle... 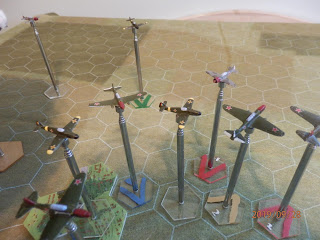 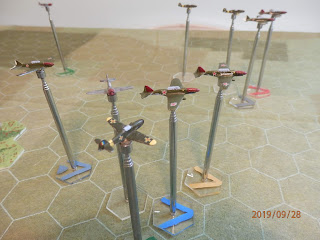 And our green pilot takes a shot and damages one! 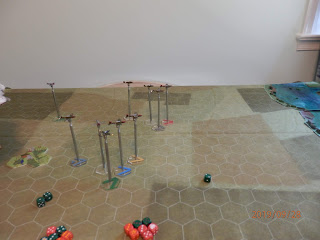 the bombers drone on getting closer to the kuban... 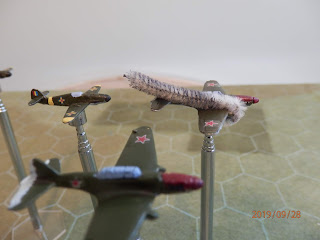 Finally Adj Stag Manoliu's persistance is rewarded by smoke coming from a sturmovik's engine.  It pulls out of formation but only heads for home.  Russian fighters protect it well.

As flak blossoms the Romanian fighters break off with only 2 bombers diverted from their mission. 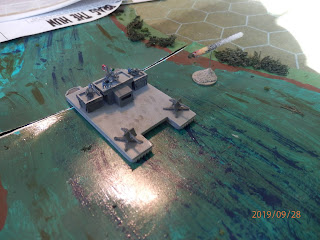 Multiple rockets head for the 2 ferries.  Only 2 hit and they cause minor damage.

Each sturmovik carries 2 small bombs in addition to the rockets.  I use my Brag the hun rules to bomb.  While the ferries are slow and they look huge in the pictures, they are actually very small targets... 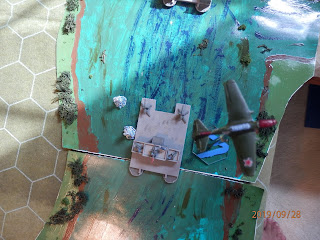 obviously too small for our 4 bombers... 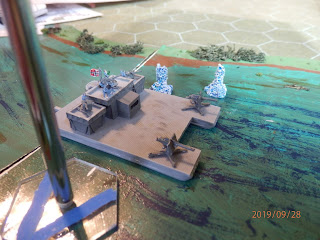 
The 3 romanians head for home but there is one more drama to play out.   Remember our dear Capt leaking fuel?  We use the AKOT table from Squadron Forward and I decided it is unlikely that he will make the airfield.  A d10 roll of "7" confirms he is going to be short.  As his gas gauge moves to empty he radios his position and looks for a flat place to set his plane down.  I decide he is likely to  find such a place in southern russia and he does.  He shuts his engine off and glides down as best he can.  He has never heard such screeching and groaning of metal in his life but when the dust settles he is alive and in one piece!  The plane sustains only major damage; good landing.

Great battle!  I declared it a draw because we did not stop the attack on the ferries but the escort was strong and the ferries were unhurt. ( more or less)  Plus the good Capt did pick up 1 kill.  Our green pilot Moraru upgrades to average.  The squadron's reputation also goes up to 2 which is very good and signifies they are considered somewhat elite within the Air Force.  ( True Top Gun status is 3.)  This will help with many checks as people start to behave they way it is expected.  If people see you as a hot shot you will start to believe you are!   Things are looking up.  Hopefully next time I will report my second Romanian ace.  (I have one in my IAR-80 squadron already.)