Rear guard action with Sgt Jackson and the Pathfinders 1986

They had been pulled off the line the second day to restock and rest.  It snowed that night.  The next day the Russian sledghammer they had been warned about hit and the front was breaking open.  The LT said they were to advance to a position 5 klicks west of Mittlekoph and hold the road open for retreating troops.  Jackson didn't like the sound of that. 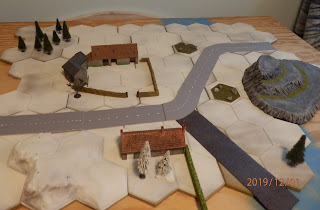 US sets up middle and to the left.  Russians expected from the right.  Lt puts Jackson into the farm, center.  1st squad dragon on hill bottom left and LMG with platoon HQ in building bottom . 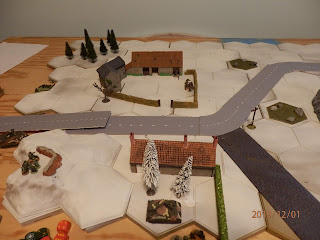 Sgt Jackson puts Cpl Hanks with dragon behind fence and Cpl Reyes up in loft of barn.  Both looking down the road.  He hopes Hank's missiles do a better job today.

Engines heard coming down the road! 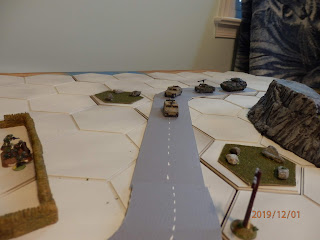 Beat up US vehicles coming down the road.  In this variant if 2 of these vehicles are KOed the US loses. 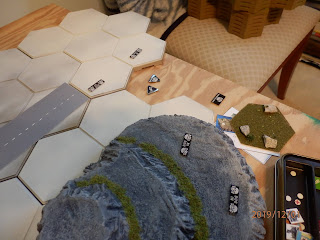 Russians split their forces with several taking the high ground and 4 blinds circling to take a side road in 4 turns. 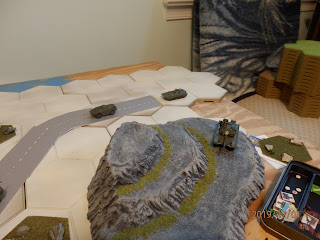 Interesting.  A scout car and squad chasing the US while a tank looks for a firing position.  Didn't see that coming. 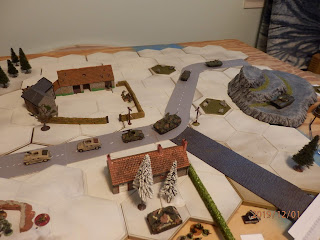 Sgt Jackson's swears.  After they see the line of US vehciles he sees a russian scout car machine gunning a humvee.  The Bradley turns it's turret but clearly it just wants to keep moving.  The range is too short for the dragon so Hanks is going to have to use Laws.  Each FT has 3.  Meanwhile off to his right he hears a dragon fire and sees a russki tank fire into Sgt Hank's position. 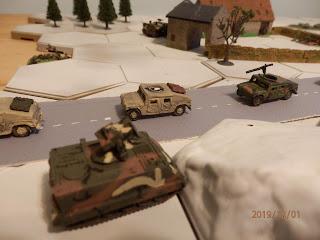 The Humvees continue their trek as the 901 fires at the T-72. 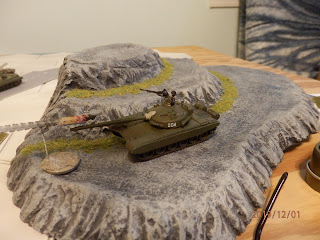 A hit disables the tank before it can fire.  With their gun damaged the tankers retreat. 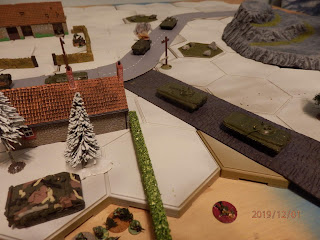 Hanks takes care of the scout car but now those 4 blinds coming in by the side road turn into the rest of the soviet platoon plus another scout car!  Sgt Jackson, seeing the new threat from the barn loft, moves Cpl Reyes down to the wall facing the LT. 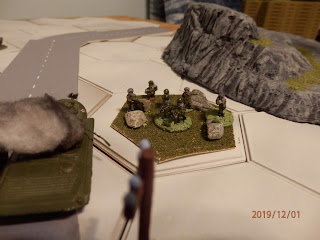 Meanwhile Cpl Hanks takes out the original BMP with his second Law. 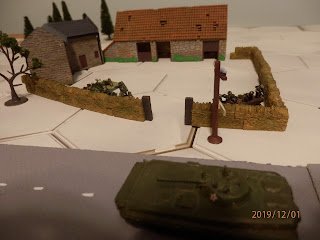 2nd squad now in position to face it's new threat.  They can't get down the road! 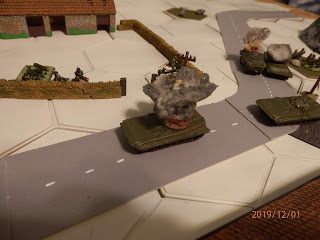 1st squad's  dragon finally scores a hit!  The survivors, caught in a crossfire between Reyes and Lt Fitzworth retreat quickly in poor order. 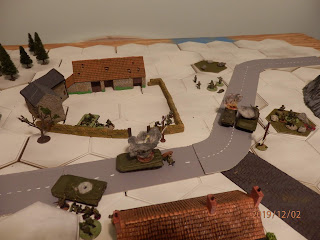 The last BMP makes a run for it and a Law from Cpl Reyes' FT stops it cold.  The survivors are chewed up until 2 actually surrender to Sgt Hanks.  Towards the top of the picture you can see the original russian squad is making a run for the barn.  Cpl Hank's fire doesn't stop these brave soldiers. 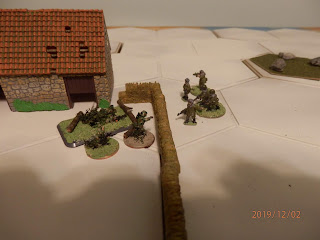 Sgt Jackson takes the FT and races for the fence.  He beats the Russian squad there and hand to hand breaks out.  Jackson dispatches 2 personally [ hero random event] and the Russians flee. 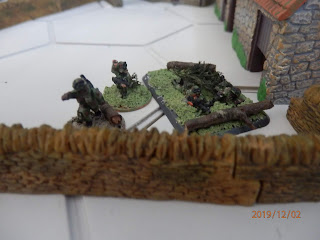 Sgt Jackson and Cpl Reyes after the battle.

Great game that was a definite win for the pathfinders.   Post battle 1st squad's Sgt Hanks leadership improves to "good".  Lt Fitzworth puts Sgt Jackson in for a Bronze Star for his defense of the farm but Capt Lee doesn't feel there is enough there to forward.  Finally there is a shortage of Laws so the squad only gets 2 for the next mission.  Then Sgt Jackson meets SSgt Alcantera of the battalion supply and manages to scrounge 2 more.