A meeting at the gas tanks with Sgt Jack

First things first; Cold war tanker has been released and is up at Wargame vault.  You can find it here:
https://www.wargamevault.com/product/294560/Cold-War-Tanker?term=cold+war+tanker

Now I was playing around with Cold War Tanker to take a break from all the naval games I have been playing,  I was trying to move it into the gulf war period.  I set up a simple meeting engagement with some gas tanks in the middle of the board.  I was not having much luck as the US forces rolled horribly every time.  In 4 games the Abrams tank never hit an Iraqi tank though most of the time he needed to roll a 5 or higher on 2 dice!   I decided to give up and play it out using FoF.  So unlike most of the times I post, this time I did not roll up the table, I did not roll up the opfor, I did not roll up the scenario using Platoon Forward.  All I did was drop my marine squad into this meeting engagement.

Sgt Jack mulled the mission over in his mind.  Though the war was not about oil it seemed that way sometimes.  His squad was detached with an Abrams to go almost 90 degrees from the axis of advance to go and secure some gas tanks sitting along route 736 before they could be destroyed.  Resistance was suppose to be minimal.  Any problems call back for some air support the LT told him.  Well Jack thought, at least they had a tank up in front... 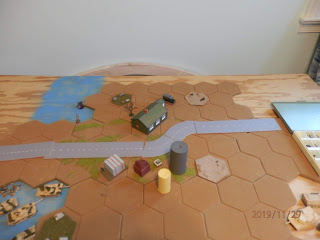 Squad is 2 men down from last mission. 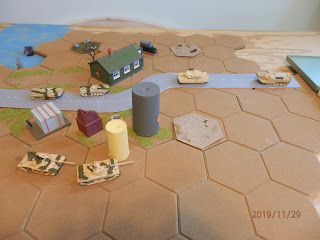 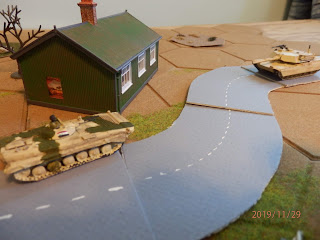 Close up.   Everyone is unbuttoned.  Iraqi tanks actually get the initiative and swing around and fire at the amtrac.  This panics the driver who guns the track away from the tanks.  [ This board is clearly anti US when it comes to die rolls!] 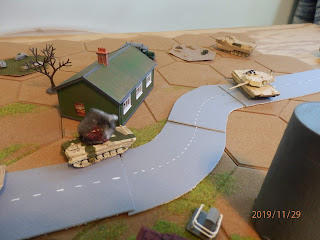 The Abrams destroys the BMP and swings around to face the T-72s.  ( You can see the amtrac fleeing in the background) 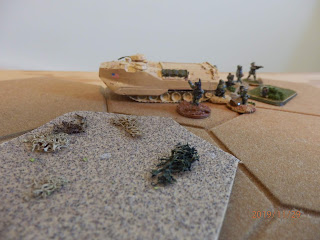 Meanwhile Sgt Jack has clamored up to the front and forced the driver to stop.  He dismounts the squad promising to deal with the young driver later.   He is 60 yards from the building he was hoping to occupy.  A quick sprint and they should be alright... 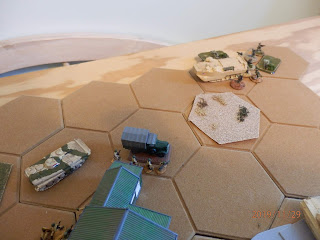 Nuts!    This is going to be harder than I had hoped.  He has Bett's FT and the trac lay down fire and he leads the rest of the squad forward towards the truck... 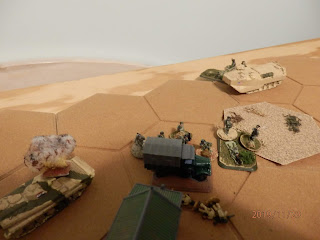 That actually worked!    No casualties.    Now you see why his squad will follow him anywhere. 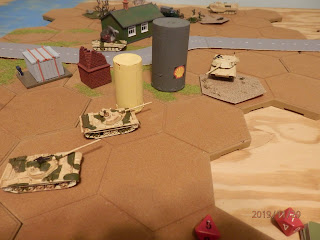 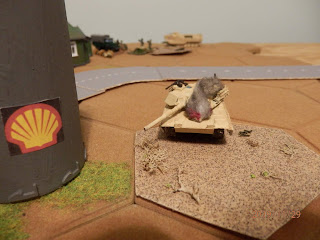 Bang!      Now I know this board is rigged against US vehicles.   This is only the second time EVER I have had an abrams destroyed in combat in FoF.  The other time was by an aircraft.

Back at the truck...

After trading shots with the Iraqis in the building Jack decides a charge is in order... 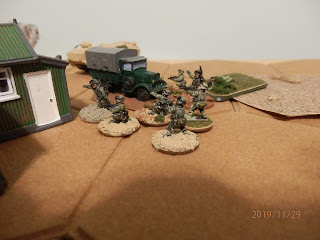 I really like the close combat mechanism in FoF plus the pinning mechanism of Combat Patrol.  As the marines charge the Iraqis do final fire.  Multiple marines ( including Jack) are pinned during the charge leaving only Koke and 2 others at the door.  They pass their morale check but Koke is not keen on entering the building with only 3 of them.  They scramble back behind the truck.

3rd FT flanks the building and everyone starts trading shots.

All looks reasonable until... 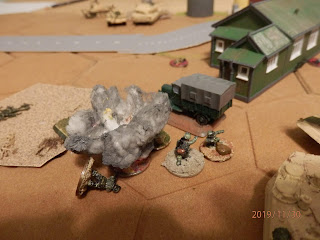 The Iraqi tanks realize there are no other threats and start to shell Jack. 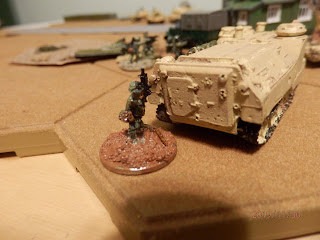 Sgt Jack runs back to the trac to get some air power.  (That is right Jack, the US Air Force!!!!!) 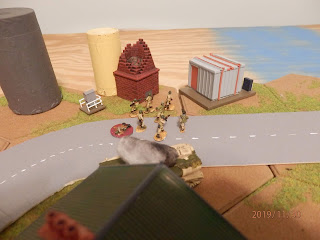 US small arms fire is having an effect though.  Cpl Betts see Iraqi troops fleeing the back of the building.  ( Their officer and NCO were killed.)  The fireteam leaders hold a quick war council with Koke pushing to charge the building again as they can't stay in their current position.  As the decision is made Sgt Jack returns.  He agrees with the decision and the marines storm an empty building.  During the shelling they sustained 1 WIA.

In the building Jack looks out the window and sees... 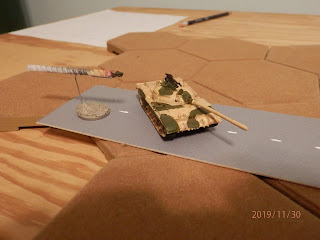 This is followed by a huge explosion.    The other Iraqi tank flees but doesn't get far.   Sgt Jack's squad has accomplished their mission!


Great game that played in just over an hour.   Post mission clearly Jack's mentoring of Koke is paying off.  Unfortunately I miss leadership rolls for upgrading him to average and for the FT regaining trust in him. Betts is clearly solid and Jones' weakness has not stopped the squad.    2 replacments are found so the squad is back up to full strength.

Posted by FlightDoc at 4:49 PM