Sgt McMann, The 10th Mountain and a new Raid scenario

Sorry no posts for a while.  We bought a beach house and that is taking much of my time as of late.  With the US finally leaving Afghanistan it got me thinking about that war and I decided to brush off my 10th mountain for a scenario.  It is a great squad with many cool missions under its belt. The last one in March of 2020 you can find on this blog entitled "Rendon's rosary".  Sgt McMann is well respected as a leader and has got his squad through some things.

So I rolled up "village sweep" for a scenario and realized that, while appropriate for the 20th century, it really didn't fit with the 21st century.  The intel is so good for the most part that western forces don't sweep but raid in a surgical strike.  So for those of you with Grunts Forward that want to take it into the 21st century replace "village sweep" with "raid".

Situation:   Intel has determined a target house with drugs, weapons and/or bomb making material in it.  There is a 50% chance there is a high value target present as well.  Secure the house and it's contents.  Capture/kill it's occupants.  Capture the HVT if possible.    Strike fast and strike hard.   This mission will get us one step closer to home!

Roll up the board as per PF.  Place the target house in block 2.

Your Forces  Suggest you take 2-3 squads.

Reinforcements    starting on turn 3 for 4 turns an "A" reinforcement shows up randomly entering moving towards the sounds of guns.

Forces in the compound (other than minimal guards) will not activate until turn 3.  Forces outside the compound have a 50% chance of activating on turn 1 and then automatically on turn 2. If a HVT is present he will attempt break out until turn 5.  His personal bodyguards will always be better than the regular troops.  He can escape any edge.

If HVT present, capture him you win.  Kill him with minimal casualties and it is still a victory.  If he escapes the best you can do is draw.  If HVT not present then capture building and as many occupants as possible with few casualties for the win.  If no captures or multiple casualties you lose.

Intel had pinpointed Nadim's drug house and both Nadim and his dad were said to be there. The plan was to raid the drug house and capture Nadim.  Lt Richards outlined the plan.  2nd squad would surround the compound.  The ATG would blow open the gate and 1st squad (Sgt McMann) would enter the compound and capture the drug trafficker. 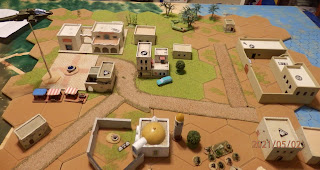 The board rolled up for the raid scenario.  I used "urban" but envisioned a small town. Target building on the right.  10th mountain enters from the left.  Black markers are blinds. 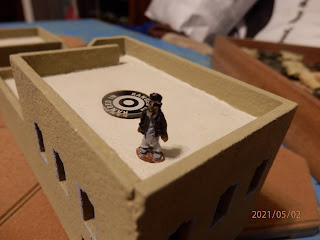 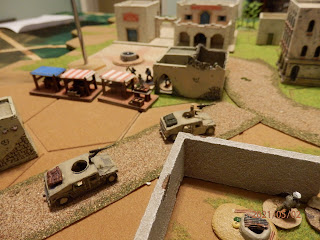 2nd squad and Cpl Adams lead the charge through the town as the rebels find their weapons.  Lt Richards has told all of them to not stop before the compound. 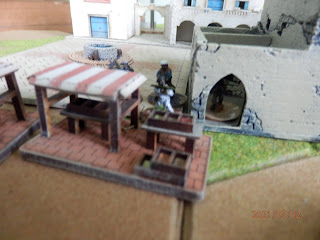 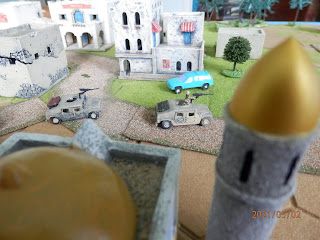 But the fast moving Hummvees are hard to hit this morning and everything is going according to plan. 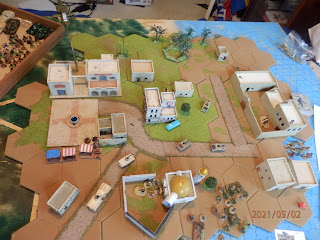 All US forces on the table now.  2nd squad spreads out.  LT in the ATM followed by McMann in the cougar.      The Apache draws a bead on the rebels in the market stalls and ... 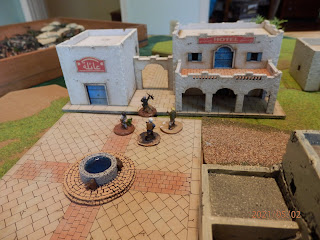 They decide they have had enough fighting for today! 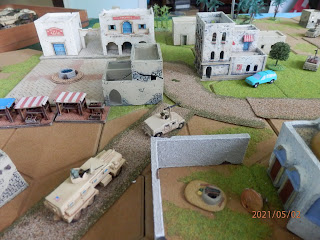 Sgt McMann's cougar almost runs into the LT as his humvee stops.  McMann fears the humvee has been hit but... 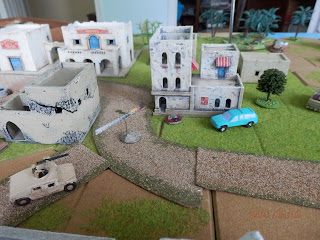 no the LT just decided to fire a missile at some hostiles in a club in front of the road!  Sgt McMann just scratches his head.   [ leadership check on Richards had him stop for a turn.] 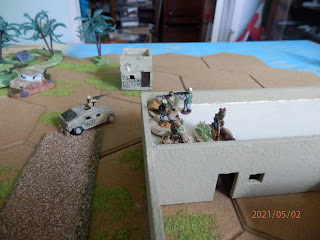 Meanwhile the target building is starting to stir as Cpl Adams rounds the corner. 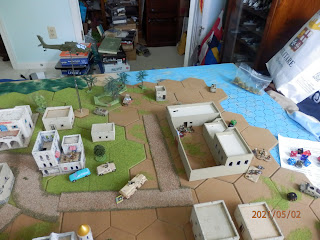 Everything in place for the assault.  [ Random event has dropped 1st squads morale back to normal hence yellow marker behind cougar] 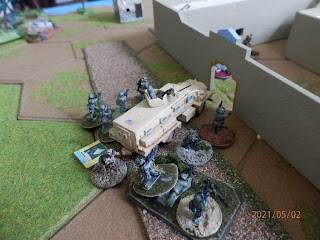 The door is knocked down and 1st squad enters!  McMann sends Anderson left and he goes with LCpl Schlact to the right.

Anderson does very well.  Encountering 5 taliban who have been roughed up by the Apache.  He loses no one and captures 2. 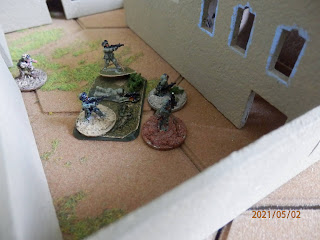 Sgt McMann loses no one across the courtyard.  In a 5v5 pitched battle they have 2 soldiers go down but the medic is right there. 1 scratch and 1 light wound.  No prisoners, No Nadim or his dad.  [ one of the 5 will later be identified as Nadim's younger brother.]   A quick run upstairs and no Nadim. 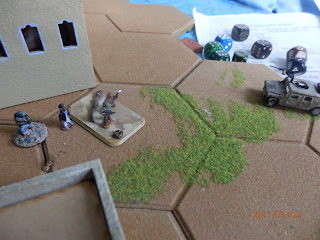 Nadim's dad leaving the compound.  You would think he wouldn't have a chance right? 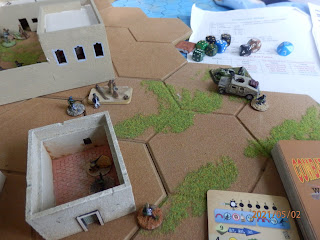 His group is only pinned!  Worse reinforcements show up in the building right next door.  Now the US fireteam has a fight on its hand and becomes pinned! 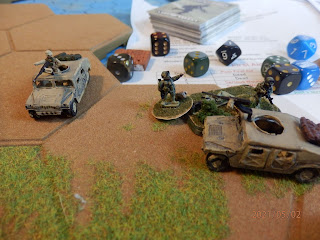 Cpl Adams shows up to try to restore the situation.  Being new he fails to rally the FT. 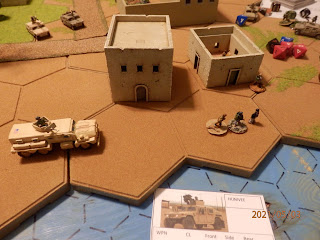 The Lt, hearing about an impossible escape, jumps in the cougar and drives over to stop this attempt.  He sees 3 figures including a grey haired man.  He screams for the turret to fire but it is too late.  They vanish in the dust of Afghanistan.

An amazing escape that cast a pall on an otherwise sold operation.  With only 2 POWs I called it a loss for the 10th.  Capt Ross is not please and blames the LT.  The LT blames Cpl Adams who does not get his promotion to Sgt.    1st Squad did well but Sgt McMann and Cpl Anderson miss their leadership rolls.  McMann's squad still has high morale at 10 though.