Sometimes the cards are stacked against you. Lt Phillips vrs a German Convoy

Thank you for all the support for Flotilla Forward.  It is selling well and Steve at Wargame Vault is even going to make a donation to the foodbank.  So far I am hearing positive things.  I thought I would do a thourough example of play through a battle report to hopefully answers questions about FF.  We can use our Friend Lt Philips who I posted about in November if you want to go read about that battle.  He is with a dogboat flotilla in the channel at the beginning of 1944.

So lets roll up three boats and see what we get.    First we will roll up LtCmr Piggot the CO.  For the first table we get Obnoxious, second we get position and third we get son of a boat captain.  We fail to get a special skill and we find he is at a veteran level. For game purposes he will get a -1 on interactions since he is obnoxious.  He will be a naval reserve officer as almost all coastal forces for Britain were.  [ The exceptions will be noted on the third table.]  How do we put this all together for our campaign?  The best this is it is open to your interpretation.  Mine is, LtCmr Piggot is a reserve officer with a great deal of sailing experience having learned the trade from his father since he was knee high. He runs a tight ship, as his father does, and will be the first to tell you if you are not meeting standards. He plans on having the best flotilla on the Channel so he can get promoted.  Next we get our friend Lt Phillips.  Unfortunately we get obnoxious, hedonism, of course a famous yachtsman, no special skills and average.  So, he is a famous yacht racer activated for the war who just recently transferred to the coastal forces from the "big" navy.  He didn't fair well there as he felt he knew it all and his fellow officer's didn't take kindly to it.  He lives for the moment for he might not be here tomorrow.  I will spare you the details of Lt O'Leary, RN.  Suffice it to say he is former enlisted, foolhearted Irishman who is fond of the bottle but can fix anything that is broke.  He gets +1 with interactions with his crew.

When starting out I normally roll up 3 non player characters as well to get us started.  I always roll up the next commander in line plus 2 other.  First we will roll up the base commander.  This is Capt Townson, RN.  He is the son of an admiral who is cheap so I don't think we will be getting material favors from him!  Next I get the chaplain.  This is Chaplain Meadows, he is off colour and gets along great with the men.  Finally I roll up Miss Rennison. She is unique as she is a love interest.  I don't think we have to roll to see who she is with right now as it is obvious to me, Lt Phillips!  He is a hedonistic famous yachtsman, what's not to love?

Now that we have our 3 boats we roll up a mission.  We get Convoy Intercept.  It is a small convoy with 4 small escorts and 1 large escort.  [ We added 1 because this is a late war convoy].  We proceed to the environment.  Visibility in the channel with be a mile but the wind is whipping with a beaufort 5 and scattered storms.  Why send us out tonight? "Don't you know there is a war on?" is the response.  The waves will be a problem causing us to pass a skill check to go full speed.  For average crews this will be 4-6 on a D6.  There are no land masses on the table.

We are all set.   It takes just a minute to roll up a battle.

So now our famous yachtsman is bouncing around in the channel off the dutch coast. 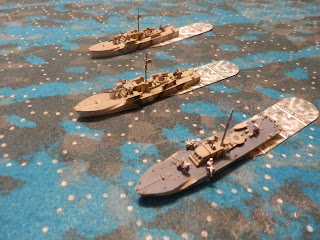 Our brave flotilla!   Piggot in the middle flanked by O'leary closest and Phillips away. [ O'Leary is in an early dogboat with 2 tubes and 2 2 pdrs, no 6 pdrs. 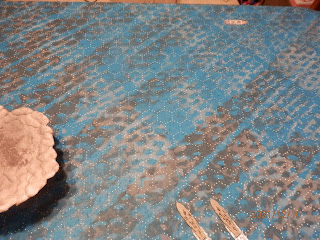 Point of potential contact!  Each hex is 100 yards.  I set up the convoy with the large escort 1500 yards in front of the 2 merchants. [ I only have 2 so that is how many the Germans have!]  A small escort is off to each side 1500 yards and one a stern.  The last small escort presents a problem.  I could use AKOT to place but it is just as easy to roll a D6= 1 in front, 2,3 starboard, 4 a stern, 5,6 port.  Unfortunately for us it is placed starboard of the convoy.    I roll to place my one squall and it is placed in the left close corner.  Next I roll where we potentially spot the convoy, 45 degrees off the starboard bow.  So I position the board as above just in sighting distance.  Now we are ready to begin; use your tactical rules to play this battle out.  For this battle I used Narrow Seas with house rules for spotting.

Unbeknownst to our brave flotilla the Germans spotted the British right away.   In Phillips defense the slow moving ships 10knots] are hard to spot a mile away!  The German commander decided not to initiate contact.  With luck the British would pass by. 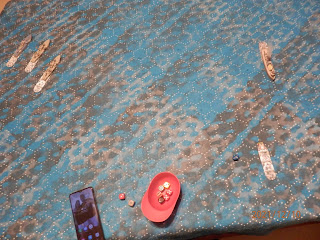 The french trawler kept tabs on the British as the German commander sent his "extra" escort down to shadow the dogboats in case trouble erupted.  Meanwhile Lt Phillips continues to stare futilely into the night. [ Every turn they had a 40% chance of spotting, it wasn't my fault!] 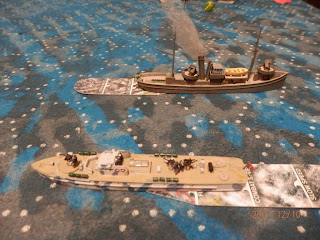 The second German escort turns into a Raum boat as it too spots the British.  It's green crew having trouble making headway in the choppy water.

Fortunatley for our scenario...

Lt Phillips spots a Raum boat 1600 yards out moving to cross their bow.  He tells Piggot and the British are momentarily confused.  The Raum boat is heading the wrong way!   Is this a different convoy?  Is this a separate boat?  Was their intel wrong?   LtCmdr Piggot makes a decision.  He orders a simultaneous 180.  they will attempt to get behind the Raum boat and see if there is anything behind it. 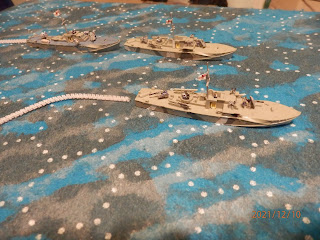 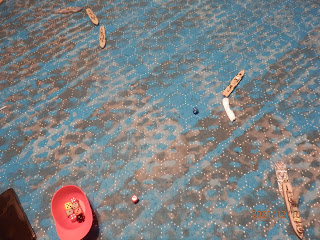 The Germans start to comply.  The British start to execute their plan. 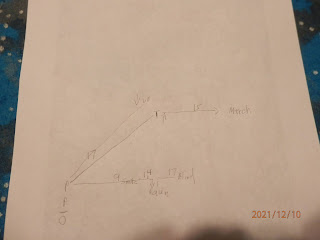 I will admit with my scale and relatively small board  have some starting positions on paper to get an idea of how long movement to "on board" will take. 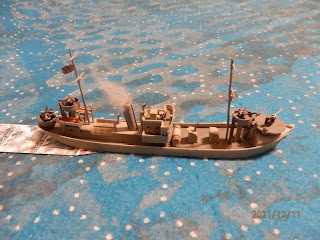 I rolled up the German's large escort.  Guess the commander has to settle for a VP boot! 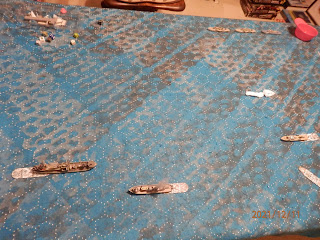 Right at the point where the VP is in sighting distance of the British.  The British are about to turn to port to get behind the raum boat.  They have been hampered by heavy swell.   The raum boat [right] has turned around behind the smoke screen.  The aft escort [ also right still on blind] is coming into the battle.  The VP boot spots Lt Phillips and again Lt Phillips fails to spot the Germans. 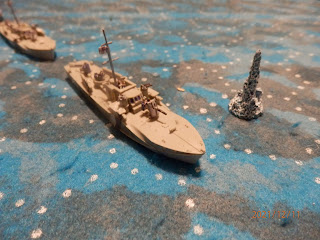 As Lt Phillips is giving directions to his Coxswain they see a flash and a large splash appears near their boat! 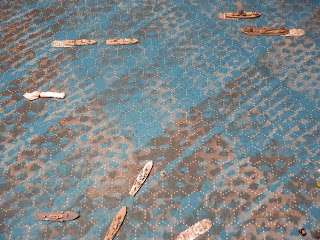 This is where, in retrospect, the cards are stacked against you.  You are fighting heavy seas, you haven't even seen the merchant ships yet and there are a wall of escorts lined up waiting for you.  But do you leave and risk talk of cowardice on base?  It is almost certain that your squadron rep will go down.  What will Capt Townson say?  Nope, we gotta try since I am safe in dry in my house!    Piggot tells Phillips to charge ahead past the screen, he will join.  He tells O'Leary to torpedo the VP boat. 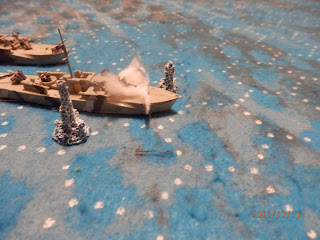 So the charge begins!    The 2 pdr is lost on Phillips boat with heavy casualties.  It appears every gun on the sea is shooting at his boat. 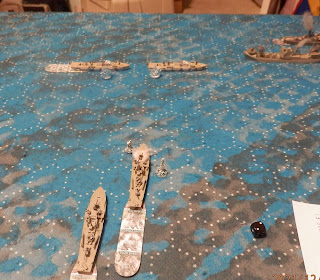 The charge continues.  The British fire with everything they have but the 6 pdrs are aft in these boats and they are simply outgunned.  LtCmdr Piggot makes up some ground as his crew is veteran. 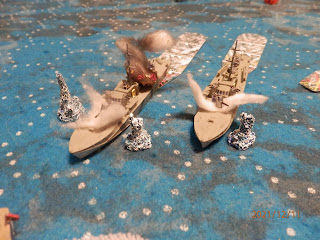 It is not to be.   Lt Phillips boat is heavily damaged with a HMG out and a fire breaking out.  Piggot's boat is not faring much better.  The charge is mutually aborted by both officers.But... 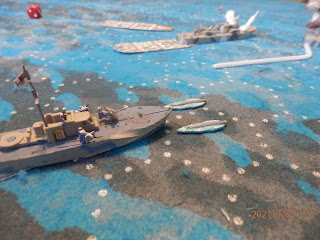 Everyone has been so focused on Piggot and Phillips that O'Leary eventually makes his way into a fireing position and...

I decided to use the AKOT to see if anyone on the VP boat was looking a O'Leary to see that he launched torpedos.  I decided it was POSSIBLE.  No one noticed in the heat of battle. 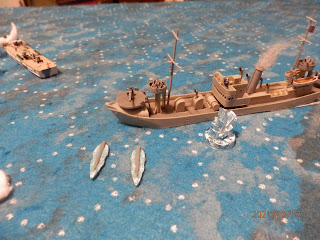 So the next turn the torpedoes die came up before the VPs did so they didn't see what was coming.  It still was a 40% chance to hit.  O'Leary's crew waited with anticipation... 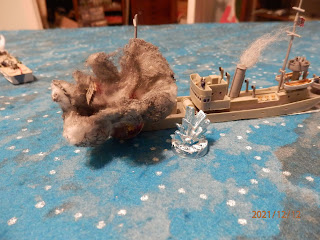 A mighty explosion rocked the night!   The VP boat stopped moving.  The dreaded 88 did not fire again. 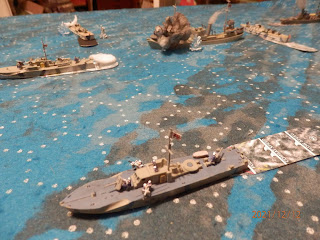 A shot of O'Leary and Phillips making their escape.  Phillips has started to make smoke.  A Raum boat is sinking from 6 pdr fire from Phillips and Piggot. 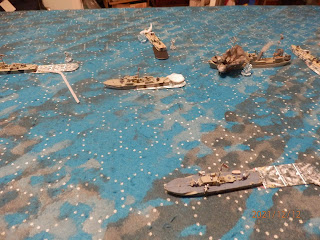 With the VP boat disabled and sinking the British were able to make their escape.

Exciting and tense battle though in retrospect I think the cards were stacked against the flotilla.  I called it a draw.  In retrospect I should have had the lead boat [Phillips] go after the VP boat and the last 2 try to penetrate the screen; live and learn. We didn't sink any merchants but escaped with 2 badly damaged craft while sinking a VP boat and raum boat.  [ The Germans would actually tow the VP boat to port.]  The flotilla comes home to lick it's wounds.  They did sink some escorts and no one will doubt Lt Phillips' courage.

Post battle we don't have to roll to rescue any crewman.  We roll to repair ships and neither will be fixed for the next battle.  Our reputation remains intact.  We can now roll to change the status of one crew.  I pick Lt Phillips crew.  I think it is PROBABLE that it will go down to green because he lost his boat during the rescue mission and lost a number of crew here so turnover has been high and his leadership is only obnoxiously average.  I roll a "3" so with new replacements he now has a green crew to work into shape.

Lastly we roll for our "event" and get naval assets.  Now normally we would have no modifiers for this table, we didn't lose our last battle, our reputation in zero and Capt Townson is neutral to us.  But Capt Townson is cheap so he is hardly a man to dole out assets, hence we get a -1.  That turns a "4" into a "3" so nothing happens.  [ We almost got a boat transferred over for next mission to help out with our losses.]   So the flotilla is down to 4 active boats now.

I hope not only was this an interesting story but gave you some insight how you can use Flotilla Forward to add a interesting backdrop to your coastal warfare games.

Posted by FlightDoc at 2:32 PM