O Group A review of the rules

After playing and enjoying Battlefront on my quest to become a battalion commander I purchased O Group by David Brown and distributed by Too Fat Lardies. 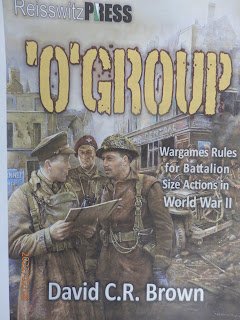 I have never played any of Mr Brown's rules before but he has a good reputation.  Of course, I am quite familiar with Too Fat Lardies.  I have played through 5 games, all solo, 4 WW II and 1 WW III.  My review will not be granular as there are plenty of videos for the nuts and bolts but my opinions of how they played on the table.  This review is not meant to be a direct comparison to Battlefront but it will be hard not to make some comparisons.

Scale    An infantry base is a squad ( or section as they rules come from the UK ) and a vehicle is 2-3 vehicles.  An inch is 25 yards and time is not exact ranging from 2-10 minutes.  I do appreciate designers who give definite scales even if it is a range.  If you have done your homework you must have used some type of scale, let us know. 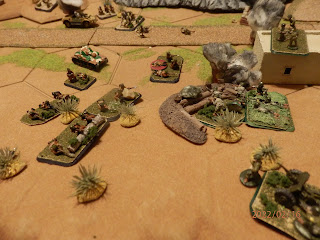 The rules are well formatted and easy to understand.  There is a reasonable amount of eye candy which is expected nowadays.  I must say the cover is outstanding and really draws you into the game.The rules cover all the stuff you would expect from a battalion set of rules.  It doesn't cover everything in the depth of other rulesets but as we will see this is definitely targeted at an infantry battalion.  The rules use buckets of dice d6 which should be familiar to TFL fans.

The system is IGOUGO but with a fair amount of interaction due to interrupts with defensive fire. You roll for iniative and units can both move and fire during their activation. I don't know about fire combat in David Brown's other games but here it is like other Lardy games with units gaining "shock" which will degrade performance until they break.  This shock can be rallied off.  Rich and I have argued this model over a decade ago.  While I don't disagree it is as valid as any, I dislike the bookkeeping involved.  I prefer rolling for suppression and the like.  I even wrote up a variable fire combat system for TW&T which he was kind enough to publish in one of his specials.  Tank combat has a "to hit" and a "to kill" followed by "to save" based on armor. There are several categories of tanks but no effort has been made to count rivets here.   Anyone familiar with TW&T or COC will be on familiar ground. 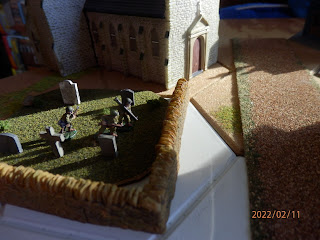 I want to mention spotting as this is a mechanic in terms of fire combat that was new to me.  There is spotting of hidden units but that is not what I am talking about here.  Mr Brown uses a concept called "obscured" for any target in cover.  When you roll your combat die you also roll to see if the target is obscured.  If it is your fire takes a penalty making it less effective.  This brilliantly simulates troops behind a hedge or a tank in a forested area.  SLA Marshall is quoted as saying most GIs interviewed never saw the enemy in a firefight.  They just fired in the general direction.  If lucky they fired at muzzle flashes.  Mr Brown has the roll by platoon but I am not sure why you wouldn't make it by squad.

Morale is straightforward in that you have to rally your troops shock off lest they become suppressed or knocked out. 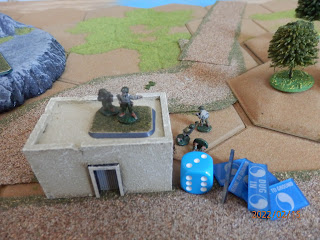 Command and control clearly is the focus of this game.  Each turn you roll 8 or 9 dice and end up with company orders that can be used to activate your troops on your turn or to react in your opponents turn and to bring in reinforcements, rally, recon or move patrols.  You may also get battalion level orders which do all the above but can also affect the initiative die roll and be saved from turn to turn.  As expected, this creates all types of decisions during your turn and once your forces are on the table and engaged you won't have enough orders to do all you want to.  This forces you to prioritize your plans.  It also makes initiative important as you don't want to spend the whole turn reacting to your opponent.  Interesting though, despite this mechanic command stands function pretty much as in any other game.

One last thing to mention about O group is game set up.  Pre game you roll 9 dice to determine how many platoons you place on the table, how many patrols you can place and if any defenders have been wiped out by pre game bombardments.  Patrols function similarly to COC, they can scout and function as jump off points for infantry. 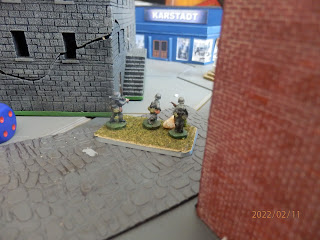 The command and control system is innovative and it works as I believe the designer intended.  I was skeptical that in game turns of 2-10 minutes why I have to keep issuing orders to my troops.  [ They are not french!]  Mr Brown states in the rules that issuing of orders does not represent a few select groups receiving new orders but rather those units moving more efficiently because there is command emphasis. "Essentially the commander is choosing his schwerpunkt,..."   Still seems a bit of a stretch but it does force the player to formulate a plan and adjust priorities, given unexpected events, to move and fight his forces to achieve his aims.  Ed on TMP said playing O group is like being in a battalion TOC.  Having been in a battalion TOC I can see his point.  [ Things don't happen as fast there though.]  Even with this brilliant mechanic I have house ruled it though.  A unit that didn't do anything in the turn can either continue its move at a much slower pace [1 hex] or rally with reduced success. I also don't limit the number of units that can rally. 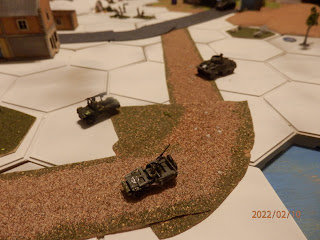 Spotting   Making spotting of hidden units an action that requires an order has given my recon units a whole new lease on life.  I have played other games in which recon units spotted better but to have recon units the only units that can spot hidden units [ plus patrols] makes them critical which is as it should be.  In addition I have already talked about the "obscured" concept above.  Interesting Battlefront has obscured but that is for firing at units before you have spotted them. [ shooting at muzzle flashes.] O group takes the concept and improves upon it.

Pre game set up and patrols  It has taken me a while to get use to this and I probably am still trying.  It is novel and for a pick up game in closed terrain between two infantry heavy forces it is great.  You can imagine sending out a patrol to go scout those woods to see if there is an ATG in there. 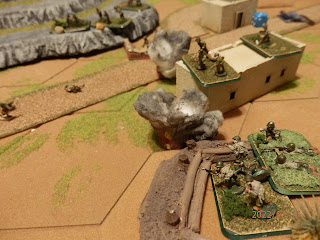 Pre game set up and patrols   If you are playing a scenario such as Kassarine with dug in defenders and you don't roll well it seems odd if you have to bring in your forces as reinforcements.  There is some wiggle room in that ATGs always start on table.  I played that dug in infantry also start on table.  Also if the attacker doesn't roll well it might make for some hard decisions as to what to deploy first but this also slows the game down if the attacker just waits for what he needs on the table.

Patrols are helpful in close in terrain but not helpful in the dessert.  Also with a tank heavy Afrika Corps they are more of a nuisance as you can't deploy tanks onto them.  For WW III I am allowing anything to deploy onto a patrol if it is behind cover.

The book only really covers the, US, UK, USSR and German forces from 1944-1945.  That said it isn't hard to figure out other forces and theaters.  Even easier than Battlefront's cards.  Also a France 1940 book has been released by TFLs.

I dislike the combat routine.   I think this will not bother the majority of gamers but I think Battlefront's routine is much slicker. 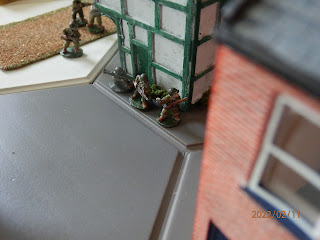 Overall I think this is a great game.  It's focus is clearly on commanding an infantry battalion in europe in the last years of the war.  Mr Brown has decided to focus on a chaotic set up and then thrust the player into consistently setting priorities with a limited resource at hand to achieve his goals.  I think he has achieved his goals admirably.  It won't be everyone's cup of tea.  The concept is abstract but it works and it is fun.  Do I save my battalion points for artillery or do I use them to get the initiative this turn? The set up and patrol is a mixed bag for me.  I think it is theater and force specific but perhaps I haven't played enough games to understand it.  I love the turn sequence with my mod that every unit does get to do something, albeit slower.  The combat routine is a no go for me but there are plenty of lardie fans that would disagree. I have already been working on a WW III expansion.

So overall a great game with some innovative concepts. Well done Mr Brown! 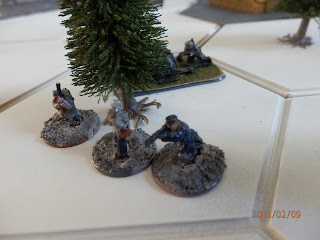