Battlefront a review of the rules

As most readers know I have wanted to upscale my battles lately from small skirmish to company/battalion level actions.  Wargaming nomenclature is murky as what is what so I want to be able to fight with several companies on the board and have a stand of figures represent a squad or maybe a platoon. I want to fight WW II, Vietnam, Cold War gone hot and African Wars.   O group caught my eye and then I realized I purchased Battlefront 15 years ago so pulled it out. I have played Battlefront 5 times now.  All games solo but 95% of my games are solo.  Thought I would summarize my thoughts here on a post. 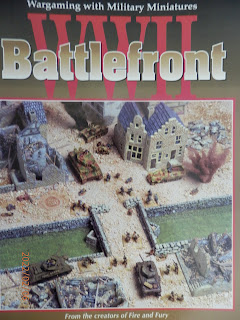 These rules have been around a long time.  I enjoyed them 15 years ago but wanted something more granular.  I moved to TWAT [still an awesome game], Combat Patrol, COC [playtester for this one] and FOF. I seemed to have come back.

The book is well written with plenty of examples and covers everything you could want.  Not much eye candy but that wasn't in vogue 20 years ago.  It comes with unit data cards for late war (1942+) Germans, Russians and Americans.  The cards are slick and have everything you need on them. They sell other cards for the other forces/times for WW II but honestly it isn't that hard to make your own if you are only going to use them occasionally.  The whole system uses a single D10. 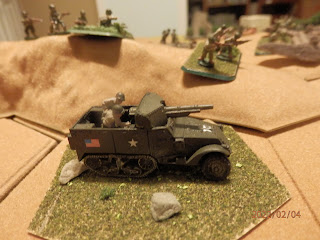 It is an IGOUGO system with firering, movement, then defensive fire and opponents turn.  There is overwatch.  Fire combat is straightforward with nothing, suppressed, disordered and KO. The result is weighted based on your target so poorer troops are easier to take down. The nice thing about the sequence is that it is all "rolled into" one die roll with few modifiers; simple. The innovative piece for Battlefront to me is morale is tied into movement. Before a platoon moves it rolls on the maneuver chart which tells you how far it can move, if it will move or if it will retreat based on it's status [ suppressed ect].  Again there are few  modifiers.  This moves the morale phase into the movement segment and works well.  Your troops can rally and perform 1or 2 moves or they can break and retreat. 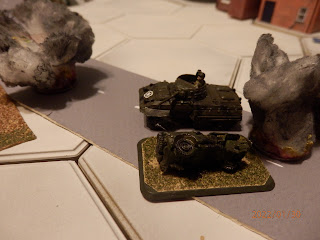 Artillery is modeled in exquisite detail with different types of fire including rolling barrages, Time on Target and others.  Close Combat is  simple with each unit rated, few modifiers and then an opposed die roll determines the winner.  Units are grouped into platoons and companies.  Company HQ units give a +1 bonus to the maneuver roll of subordinate units but otherwise play no real effect.  Every unit gets to do something every turn provided they roll well on the maneuver chart.  One more thing here, companies roll once for the maneuver chart and then the platoons provide their individual modifiers so if a company rolls poorly that company isn't going to accomplish much that turn. 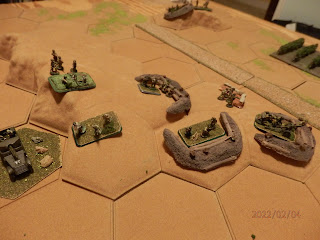 Uncomplicated, smooth combat system.  One roll does it all.  No separate roll "to hit", to "save". Troop quality is elegantly integrated.  If you like "buckets of dice" change this to a negative.

Maneuver chart deftly combines morale into movement.  The main modifier for this chart is troop quality so it is all here.  It is awkward to roll for units after they shoot but otherwise I really like this. If you download the optional maneuver chart it makes disorder harder to remove which is a big plus.  Speaking of downloading stuff..

Loads of "optional content" at their website.  http://www.fireandfury.com/products/desc_bfww2.shtml  There is a treasure trove of improvements to the system at the Battlefront website.  An improved maneuver chart mentioned above, better rules for MMGs, rules for modern battles plus cards.  The forum appears dead unfortunately but the downloadable OOBs and modern cards are still active.

Companies operate as a unit and reserves are needed without special rules.   Since companies take "morale checks" together they naturally end up functioning together.  Also since companies tend to break suddenly you will need reserves on hand to shore up your line. 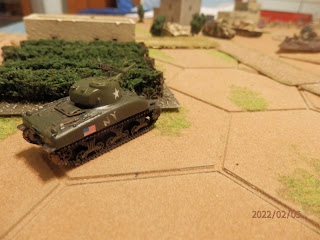 I was disappointed in the Command and Control rules  Granted this is subjective and I am heavy to the right on C+C but I didn't feel like I was having to make pressure cooker decisions.  Unless banged up all units do exactly what they are suppose to do when they are suppose to do it.  There are some optional rules for issuing companies orders on the website but they are clunky. [ great try though!]

The turn sequence doesn't make for sweeping attacks.  On offensive you have to decide if a unit is going to fire or move, you can't do both.  There is an optional web rule to allow a unit to move and go on overwatch which helps.  I am sure this is to make sure I plan everything well but I find it hard to believe that my tanks at least, can't advance 120 yards and still fire effectively in 10 minutes.  I have house ruled this to a unit can move minimally and fire ( or visa versa) with a -1 modifier. [ this reflects less time they have to fire over the turn then their non moving compatriots.]

Potentially have to buy more unit cards    Though you can figure out the unit stats for units not included in the game, if you want to play early war or British forces it would be a pain to do for multiple units.  Hence you will pay $18-30 for more unit cards.

Odd distribution of combat results.  While I like the uncomplicated combat system, there can be wide swings in results.  With no modifiers on experienced troops there is a 10% KO, 20% disrupted, 20% suppressed and 50% no effect result.  Both KO and Disrupted seem high to me compared to suppression but with a D10 there isn't much choice. With 2d6 or buckets of dice numbers tend to collapse towards the middle, with one d10 you have just as much chance of rolling a 1 as 10. Now I realize modifiers skew this but the % chance of each result remains. I have house ruled this as well substituting a D12 and leaving all modifiers the same.  Now I have a 8% KO, 16% disrupted, 25% suppressed for infantry.  Close Combat also seems to have wide swings but haven't tackled that yet.

I think this is a very good ruleset.  It sets out to fill the gap between small unit and regimental/divisional command well. [ apparently that was new 20 years ago]  If you use all or as much of the optional content you want from the web this game covers WWII and modern well.  The Combat sequence and Maneuver chart are still innovative today even if the hobby has gone more towards buckets of dice. [ Don't get me wrong, I love throwing buckets of dice.] I am surprised the maneuver chart idea has not been copied and improved upon. The turn sequence is very old school and I confess I don't like it but with my mod it seems to work better.  I suspect the C+C won't bother most gamers but it bothers me.  These two items will have me still searching for the perfect "battalion level" rule set.  Well done Rich Hasenauer!

Posted by FlightDoc at 6:51 AM