Vietnam 1966     This is my second part of the battle of Rock Hill.  For the rules and the background, including the characters we are focusing on in the company, please see my last post. 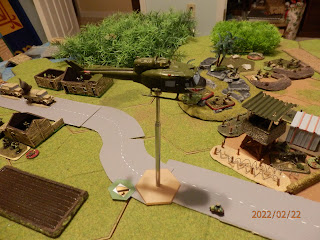 7:20
Whump whump whump, Capt Jaroz wondered what it would be like leading men into combat for the first time as route 1 got bigger in the windows of the huey at LZ Lima... 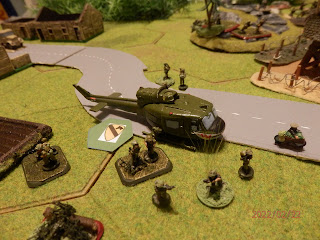 Lt Hendricks deployed his platoon around the LZ without need of Capt Jaroz.  They did disturb a couple of VC with a bazooka who beat feet as they landed.  They could hear gunfire from village 1...  Sgt Toliver quickly set up company comms. 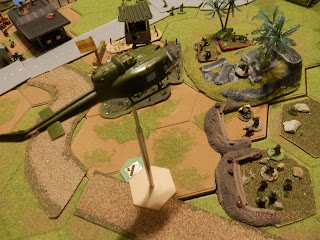 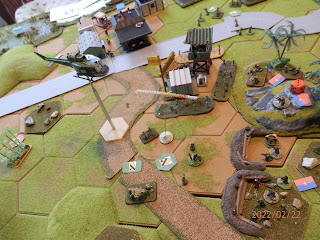 Hogs came in with suppressive fire into the trenches. 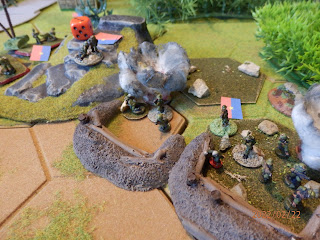 From the air it appeared to be effective.  The volume of fire died down appreciably. 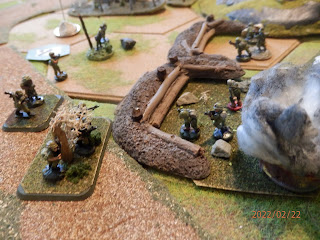 Losing no time, Lt Alvarez sent 2 squads into the trenches.  Capt Jaroz wasn't there, what could he say?  " I have to trust my people.  Go get em!" 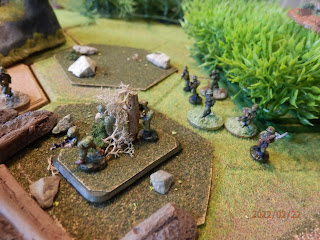 It worked!  Alvarez told a startled Jaroz that he was not fighting VC but NVA.  He was going to try to roll up the trench line but there appeared to be fire coming from the jungle beyond. 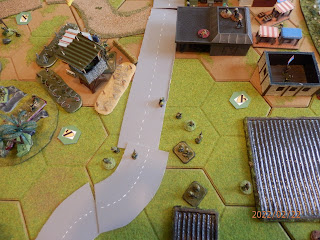 Meanwhile back at LZ Lima, Jaroz confers with Hendricks and his company Sgt., MSgt Mathews.  Jaroz wants to send a squad down to the village to meet ARVN who appear stuck.  Both men are against it. " Sir, that will weaken us and ARVN will either get out of it or run away."  Jaroz takes their council.  He asks for Hendricks to send out patrols to Rock Hill and to Duc Bien to see if we can find Charlie. [Patrol markers with 7th cav logo on them above.]  " What a strange war" he is already thinking. 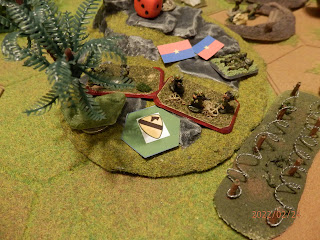 A patrol reaches Rock Hill and reports nothing.  Meanwhile back at LZ baked... 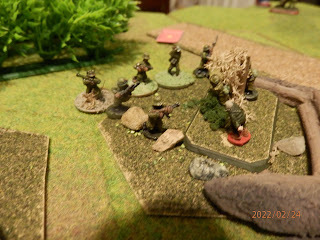 the NVA throw another platoon at second platoon.  It is too much and they are ejected from the trenches. 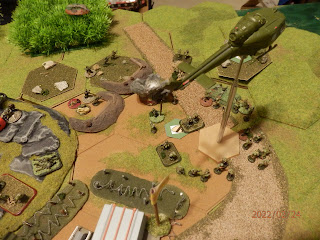 Capt Jaroz decides to take command of the company.  It is clear the battle will be at LZ baked.  He orders 1st platoon to go up the undefended side of Rock Hill.  He orders 3rd Platoon to land at LZ Baked.  He also moved his CP to Baked.  [ too many troops in the photo above.  I mistakenly placed another company.  Fortunately I remembered before the next turn]

ARVN finally breaks through the village ambush.   The Greyhounds throw a couple of rounds at Rock Hill.  1st platoon finds that Rock Hill is NOT empty here but has 2 squads.  They quickly become pinned.  The battle rages at Baked.  2nd platoon is slowly getting whittled down.  Jaroz is unsuccessful in getting a line to the 105s at the FSB. 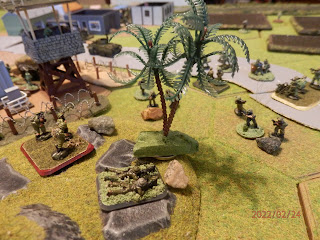 8:10  1st platoon still pinned down but they are drawing forces over from baked.  ARVN does indeed pass them on the way to "relieve" the base. 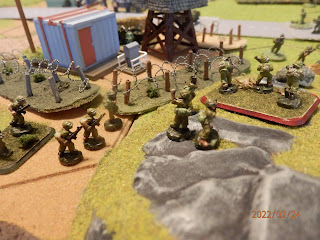 Jaroz orders Lt DeRoos up to Rock Hill to help 1st Platoon.  2nd platoon tries to hold the rest of the NVA at bay. Jaroz does get the 105s barking at the trenchline. 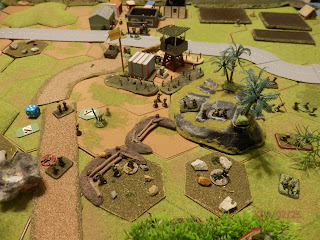 With 3rd platoon behind them and 1st in front, the NVA are ordered off Rock Hill. Even the Battalion CO leaves after ordering 82mm mortars to hit 2nd platoon.  [ remnants of 2nd platoon still holding LZ Baked.  Capt Jaroz back with his command die.  Lt DeRoos up on Rock Hill.  Lt Hendricks slowly pursuing NVA on the right.] 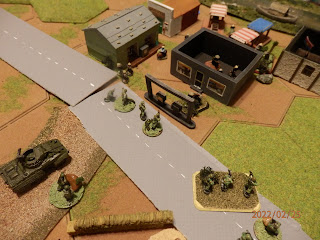 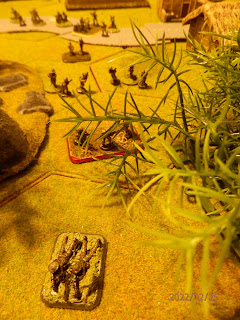 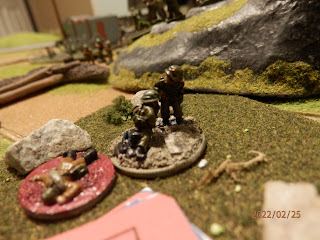 Lt DeRoos firering down the hill disrupts the NVA HQs. 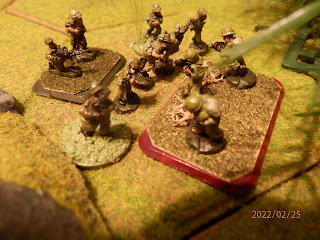 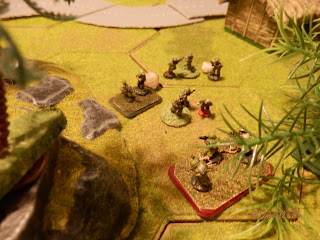 and finds cornered prey can be very dangerous! 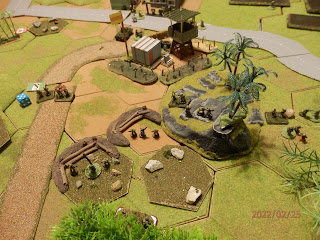 With the NVA battalion CC in retreat he pulls all his forces back into the jungle.  Capt Jaroz is able to straighten his lines with remnents of 2nd platoon on his right, 3rd platoon in the middle and 1st platoon licking it's wounds on the left. 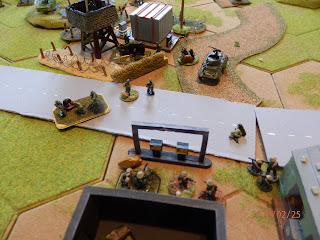 Unsurprisingly the ARVN attack is going no where. 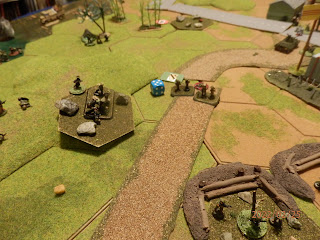 Capt Jaroz is finally able to relax.  While the NVA where able to escape, he has met them head on and won.  Suddenly rifle fire breaks out from a hill to his left.  That hill had been scouted previously and had been empty.  [ A VC platoon had been sent to help out from Duc Bien]  All able bodies are on the line facing the jungle... 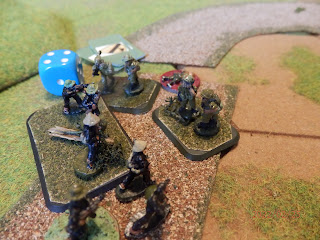 Capt Jaroz succeeds in not wetting himself as screaming VC come charging across the field.  There is no time for artillery.  MSgt Mathews starts to lay down fire.  Jaroz follows suit.  He can hear a M60 from his left.  [ 3rd platoon on the hill]... 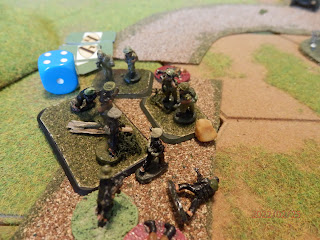 and sees multiple VC go down.  They end up sniping at each other from 10 yards away.  MSgt Mathews says, "Sir, we gotta move towards the trenches."  Unglamorously they leapfrog back to 3rd platoon. 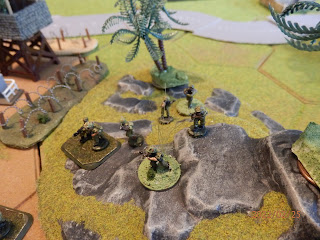 Once Jaroz is clear Lt DeRoos calls for the 105s... 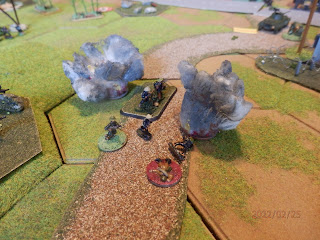 The artillery has the intended effect.

With the VC platoon in retreat the battle for Rock Hill has ended.

Great battle!  I really enjoyed it.  I really felt like I was running a company in Vietnam.  Post game I had to upgrade Lt DeRoos to a "good" leader.  For those of you that know what I am talking about I set AKOT at "likely" and he made it.  I don't know what that means yet but will figure it out.  The AI gave the NVA 5 platoons, 2 LMGs and 1 60mm mtr.  The VC had 4 platoons, 1 MMG, 1 LMG and 1 57mm RCL.

Now that Capt Jaroz has had his first test and passed how will the company react?  Lt DeRoos is a rock star.  Lt Hendricks lost a number of men though when Jaroz barked at him to hurry up.  Lt Alvarez' platoon took 50% casualties.  Stay tuned for the next exciting chapter!

Posted by FlightDoc at 5:31 PM