Thought I needed a break from all this battalion level fighting.  The games are fun but take almost 3 hours to play. Wanted something quick and easy; why not squadron forward!  I have a P-38 and a P-39 squadron in Tunisia.  I thought for something different I would use the P-39 squadron.  they have only had 2 missions, a win flying CAP and a draw bombing a naval base.  Their squadron CO, Capt Filarto is lazy but is very keen on his position; hence he drives the squadron hard.  Just because he is lazy doesn't mean his isn't a good pilot, he has a stuka and MC 202 to his credit. The squadron cool sits a +1 because they have 3 kills to 2 loses, pretty good when you are flying P-39s.

An unusual mission comes down from the group, escorting B-25s.  Normally that is a P-38 mission.  [ actually 30% chance for our airacobras this early in the war]  Filarto decides to give it to his XO Honey Donnelson.  Honey has been begging for a chance to lead and this mission will be a long one. 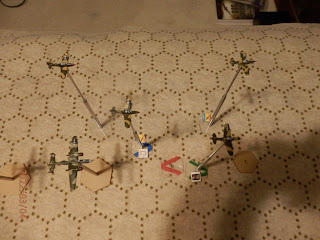 Strawberry Flight with the B-25s.

Three quarters of the way to the target the tail B-25s call out bandits 4 o clock.  Honey curses under his breath, the hun outfoxed him! 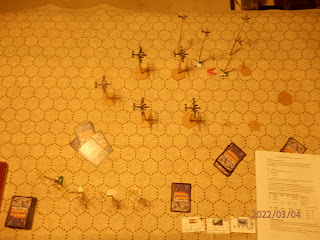 They are actually hard to see but 4 ME 110s are attacking the bombers from 4 o clock! The airacobras are caught flatfooted.  Fortunately no bomber is lost, one is separated from formation.  The green ME 110 is damaged enough that he retires.

Honey radios for the 2 elements to split up and go hunting.  He is glad to see that the bogeys are ME 110s.  They are about the only plane in Africa that the P-39 can dogfight with above 5K feet. 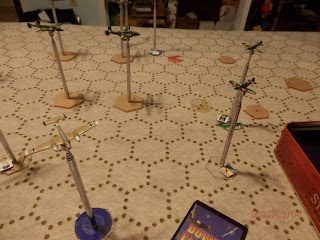 Honey gets a shot at a ME-110, he sees hits but Jerry keeps flying. 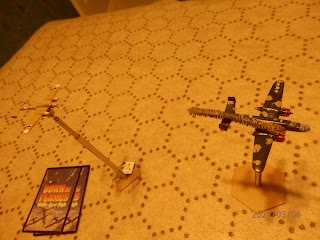 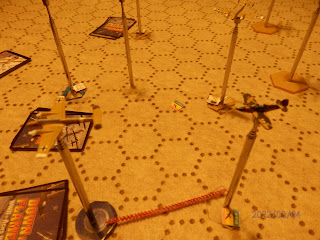 Honey manages to get on the same Jerry's tail.  This time he is close enough to use his 37mm cannon... 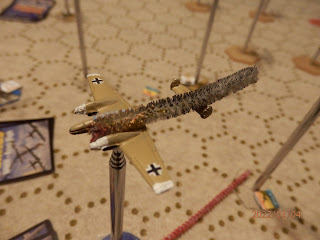 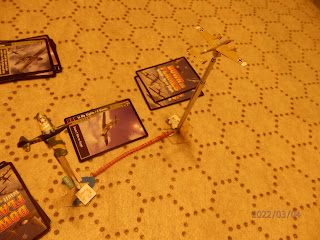 Meanwhile, 2Lt Samson finally gets on the tail of the ME-110 that has been making passes at the bombers.  There is a swirling fight as he tries to line up a shot... 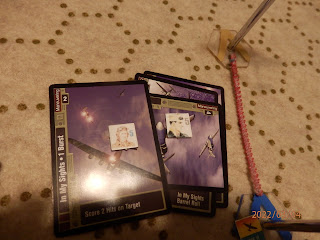 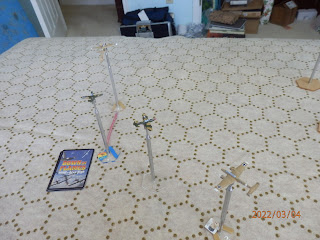 Despite every trick he knows he feels bullets pounding his plane as 2Lt Samson fires.  A major fuel leak occurs.  He calls for help from this mad american.  His fellow veteran pilot races to assist.  However, 2Lt Q has managed to stay with Samson through all his twists and turns and still has his tail.

The german dives trying to leave the area but the airacobra can easily keep up. 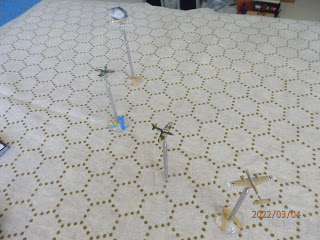 Samson lines up a second shot while Q tangles with a second ME 110 who has arrived on the scene... 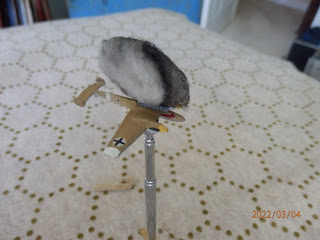 Whether it was leaking gas that ignited or ammo no one would ever no but the ME-110 suddenly blew up without a survivor.

It was a a quiet evening in the mess of the german squadron but a joyous celebration was had for the hammerheads!

Two kills for no losses!  Only one bomber lost- I count that as a win.  These battles are always fun, often tense and quick.  This one was just under 30 minutes.

The Hammerhead's cool goes up to +2 which means not only are they are teh coolest squadron in the group but on the base!  This gives them positive modifiers to many die rolls.  First for the pilots, Honey reaches Veteran status, Egert becomes average and "Q" gets sick and will miss the next 2 missions.  LtCol Rawlings growls at Capt Ford, the group admin about why the Hammerheads have been a pilot short and presto, 2Lt "Black Flag" Wilde shows up.  The old man even thinks Filarto is doing a good job.

How long can this last?  Who knows but for now the boys are going to enjoy the ride!