Awaiting arrival of my french armor from Old Glory 15s.  So this gave me a chance to play the third part of my Battle of Rock Hill.  The first two parts of the battle concern Capt Jaroze and his company from the 1st Cavalry and you can find it March 4 and Feb 27th.  Today we will look at ARVN.

Intermediate Grade Superior Officer [ LtCol] Du Can had a problem.  One of his company's had failed to take Duc Bien yesterday and it had rankled his superiors.  They had held off the americans so that the South Vietnamese army could take it and now had lost face.  He was told he better take it today.

He hadn't given it too much thought yesterday.  He had sent a company with 2 armored cars to make a show of it.  That is what he always did and no one seemed to mind.  As long as everyone was making some money skimming off the top no one seemed to care.  What had happened yesterday at Corps HQ to get everyone upset? So now all of a sudden he was suppose to actually take a town from the VC? How?  With what?  That was his problem.

Senior Grade Junior Officer [capt] Ly Tong left the office shaking his head.  He had never seen Du so upset or so intent on taking a town before.  He was given a platoon of tanks, artillery as well as permission to draw as much ammo as needed.  He needed to be in place to attack the town by 10 am as the americans were to act as a blocking force up north.  Remnants of his sister company would join his attack.  There were also US forces on Rock Hill to the west of the town.

ARVN forces    Raw except for the tanks which are trained.   US equivalent ranks used for ease of typing.

1 section of greyhounds at CIDG base available

1 platoon from Capt Jaroze's company available to assist if needed.

1 company from 1st Cav available to assist if needed. 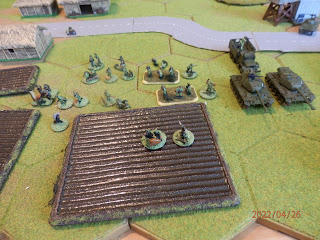 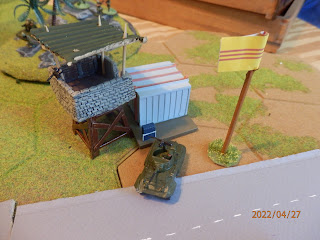 CIDG basecamp.   Too lazy to place all the barbed wire just like the CIDG. 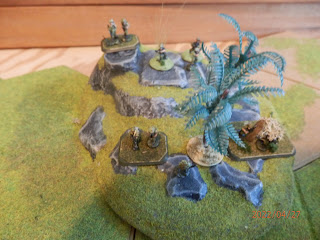 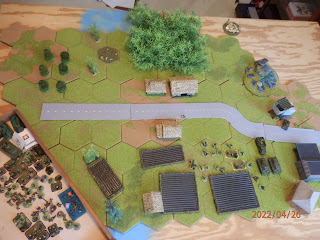 Overview of the board.  I have extended the board south.  What the free world forces don't know is that the NVA took heavy loses so they are not keen to go toe to toe with the 1st Cav today.  The VC beat ARVN yesterday and they are aware of the new attack coming.  They have abandoned Duc Bien during the night and will attempt to ambush the ARVN forces before they can consolidate around the town.  [ That is why I didn't put wire around the camp.  It shouldn't be in play.]   Capt Ly is somewhat concerned about a small ambush in the village but plans to drive through it if possible.  If not he will detach a platoon to deal with it and press on. 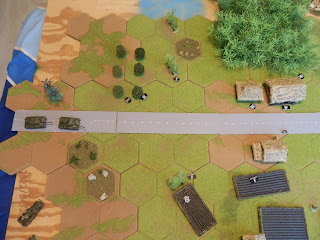 I placed blinds per the ambuscale scenario in Grunts Forward substituting platoons for squads.  This way I don't know if the VC will have an up front ambush or wait until we are in the village.  Odds are in the village as that makes the most sense to me but you never know. There will be a 33% chance that 1 platoon will be NVA otherwise this is a VC show.

Capt Ly leads with his tanks.   We will slow down just before the village to recon a bit but speed here is important. We have 10-12 turns to be in position or 90 minutes at most. 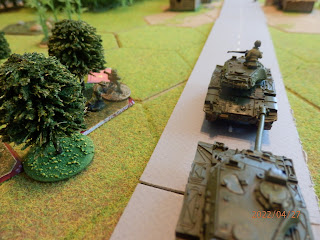 Stung by my own scenario!  Partial NVA platoon with RPGs right off the bat.  Don't even want to calculate the odds!    Each section is disrupted which to me means they lose 1 tank. 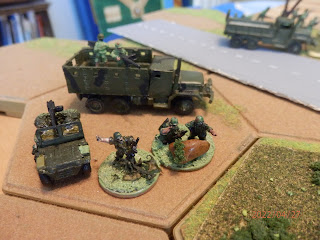 Capt Ly gets on the board with his advisor.  The gun truck starts laying down fire into the pineapple grove.  Capt Ly orders... 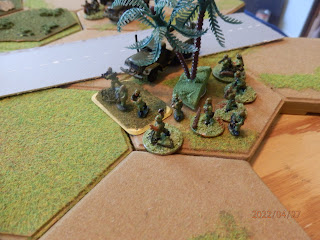 2nd platoon to deploy and take the pineapple grove.  He can't have RPGs running around with trucks coming up. 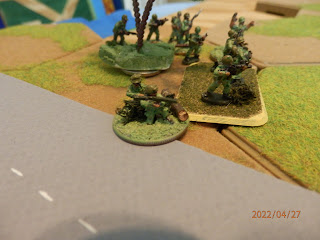 Shot of my new bazooka team in action.  They are PP US paras.  In retrospect should have sanded off the first aid kit but you can't tell on the table usually. 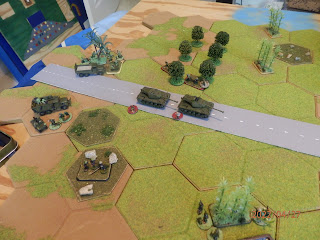 End of the first 8 minutes. 2nd platoon and guntrucks engaging NVA trying to save our tanks.  VC forces on this side of the road are hidden. 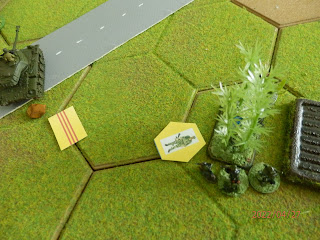 So Capt Ly tries to call for artillery and can't make the connection.  He sends a patrol ahead to see if the bamboo has any VC. [ The patrol fails to find any!] He also pushes 2nd platoon to attack which takes 2 orders since Lt Dang is a poor leader.  But Dang duly attacks... 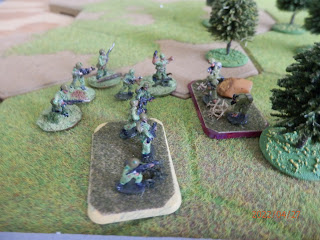 and succeeds!  The NVA are weakened and pushed out of the grove and into the bamboo beyond. 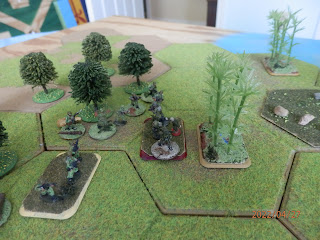 and the sole NVA squad, tired from the night before, breaks and leaves. 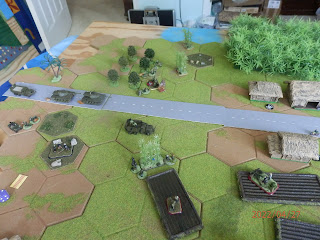 24 minutes into the fight.  The Tanks are still recovering from the ambush.  2nd platoon, fresh from their victory in the pineapple grove is being mortared which is enough to disrupt them.  Capt Ly is pushing up the armored trucks to the village to check it out since there are no VC in the bamboo and is bringing up 3rd platoon to drive through the village with 2nd platoon ordered to sweep the village. 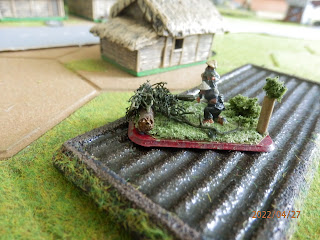 Waiting for either the armored trucks or tanks to get to the village! 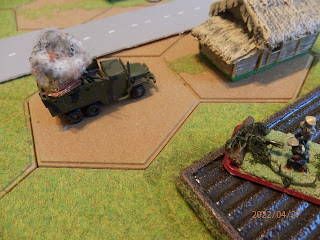 The trucks get there first.  It is not pretty. 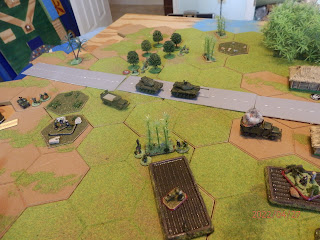 32 minutes into the fight.  LtCol Du is not happy with Capt Ly's progress.  Col Du finally gets the tanks moving since Capt Ly couldn't.  A sniper in the jungle has halted 2nd platoon's "progress" and they are back in the pineapple grove.  Capt Ly asks Col Du to get some 105 help as he can't get any.  [ I was unable to roll any 6's during the order phase in which to order artillery!]  Seeing his timetable slipping away Capt Ly orders 3rd platoon to swing around the tanks and take out the RCL and proceed to the jump off point on foot.  LtCol Du orders the Greyhounds from the CIDG to support the breakthrough through the village. 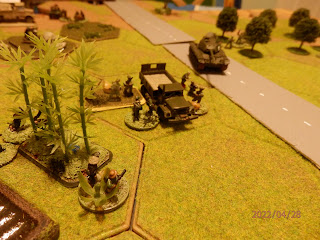 As 3rd platoon moves past the "empty" bamboo their trucks are riddled with bullets stopping the trucks. 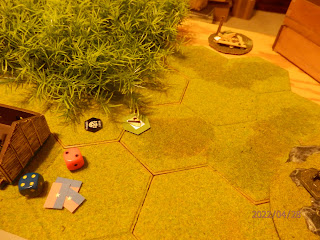 Capt Jaroze is given a warning order to prepare to sweep the village south of rock hill.  He sends a patrol to the jungle and of course they don't find anything. 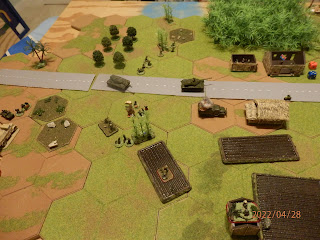 48 minutes after jump off.  2nd platoon is once again moving towards the village. [top]  A tank is finally reconing the village.  The second tank has driven off the RCL.  3rd platoon is disorganized and under heavy VC attack.[ center]  Capt Ly is almost crying wishing he could call down 105 shells. 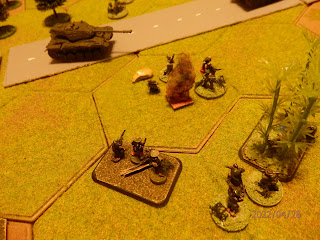 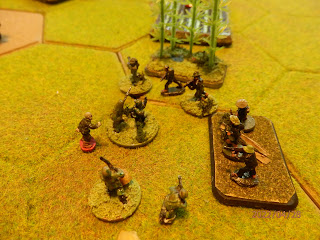 I am starting to think of that figure with the red base as "death" instead of disrupted.  Whenever he show up things don't go well.  3rd platoon and Lt Tran is obliterated.

Capt Ly has to acknowledge that without help he will not make his rendovouz time.  He still has his best platoon in trucks but he wants to save them for the assault on Duc Bien.  LtCol Du allows 1st Cav to assist but he isn't pleased. 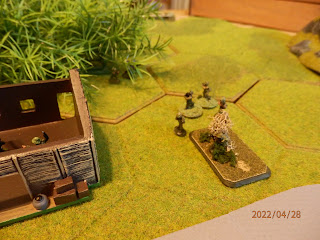 Almost an hour after the shooting starts Lt Hendrick's platoon moves towards the village south of Rock Hill.   Suddenly, the jungle that was empty... 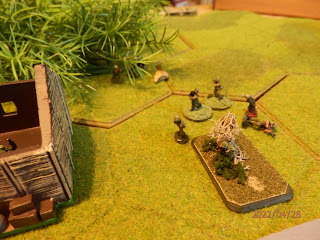 rings out with gunfire.  M60s manage to suppress the VC but 2nd squad takes some casualties and is disrupted. 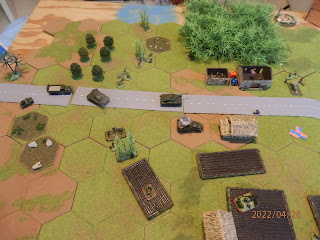 An hour and 5 minutes after contact.  Capt Ly moves up to personally take charge of 2nd platoon to get them to sweep the village from one side as the americans sweep from the other side.  Tanks will support.  1st platoon will then race to the jump off with the surviving tanks.  Not a great plan but what other choices are there? 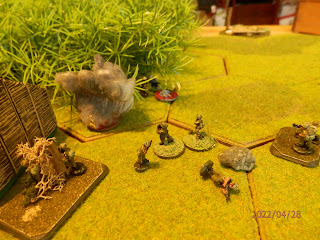 Capt Jaroze has no trouble calling 105s down on the VC in the jungle.  Hendricks stays with 2nd squad to rally.  He tells Sgt Jenson to take 1st squad into the fringe of the village and check it out.  Hendricks suspects it is clear since they haven't take fire from that direction.  3rd squad moves up. 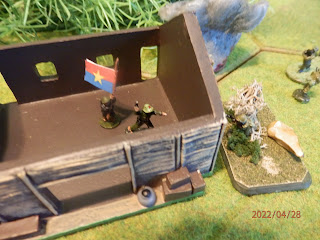 Sgt Jenson runs into the VC Company HQ.  [ US got initiative.  If VC had initiative they would have moved!]  HQ personnel supress the squad but Jenson presses on.  [ He could have stopped but what is the fun in that?]   For close assaults I have switched to a D6 to have less extreme results and have toned the table down a bit.

Even suppressed the US have a +1 advantage in the assault.   This could be really cool for Sgt Jenson... 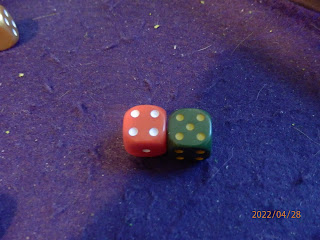 Yesssss!   They take the building and the HQ retreats in disorder. 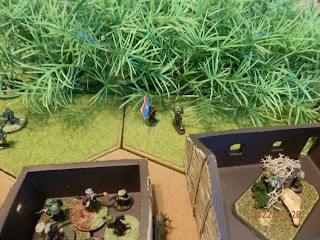 Unfortunately they took their flag.  That would have made a cool trophy. 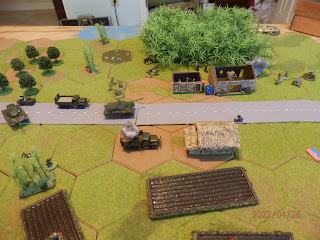 With their HQ disordered in the jungle and 2 squads in the village about to be swept from 2 sides the VC withdraw quickly while they can.  It has been 80 minutes since the battle was joined. [ 10 turns.]

So the beat up ARVN forces just make it to Duc Bien in time to launch the assault with the 1st Cav blocking but of course they find the town empty.  Technically a win for the ARVN as they made it and lost only 6 stands compared to 4 for the VC but it sure felt like a loss.  They did need US help as well. LtCol Du  isn't happy with Capt Ly but knows Ly is his best commander so what is he going to do?  Du explained to Corps that he fought through significant forces  as exemplified by how much of his own force was engaged at once and still managed to meet the scheduled timeline.  He didn't think he needed US help but his company commander was skitish and called prematurely. He would mentor Capt Ly because he does see a good officer in there.  He does needs Corps help in fixing the response time for artillery however.   I decided it was unlikely [ on AKOT] that LtCol Du would be sacked and he wasn't.

Great fun!  It played fast with smaller forces involved.  I gave the VC 6 command dice as they really only had 2 platoons in play at any one time.  ARVN had 8 to start but they I added a 9th once the greyhound and US became involved.  It was amazing to me how handling the ARVN was so frustrating.  I couldn't get the tanks and 2nd platoon to move!  Conversely Lt Hendrick's platoon who is trained seemed like a snap in comparison.  I do think that having poor leaders lose an order in 1-3 is too harsh however.  I will reduce that to 1-2 and see if that works.  The Grunt Forward's set up rules worked very well and laid out a credible, if somewhat forward, defense.  It is fun to not know what you are facing.   For those of you interested GF generated:

I considered VC as trained on the combat table but experienced on the morale table.

Posted by FlightDoc at 1:30 PM