Still interested in playing my larger company/battalion games.  Am beginning to settle on each hex is 100 yards and each turn is about 8-10 minutes.  Ordered the early war and desert cards from battlefront, they are nice.  So because of that I decided to continue the french theme and do early war french.  Found a skirmish campaigns scenario book 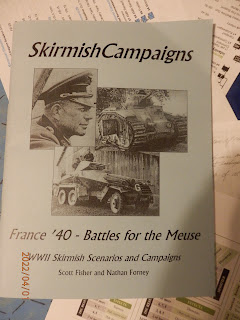 that I had bought years ago before I had come up with Platoon Forward.  They have several linked scenarios.  While I figure out how to do Battalion Forward I thought I would take a motorized infantry company and run them through the beginning of the war.  The first battle is two reconnaissance units meet in the Arlon valley on 10 May.  Since my motorized unit aren't motorcycle troops I removed one platoon [ french companies have 4 platoons] and gave them 2 armored cars.  I rolled up my officers per PF/GF and we are off!

The Chef de Battalion called Capt Moulin into his office.  "It appears it has started", he said.  We have reports of Germans crossing the border this morning. Take most of your company up to Arlon to act as a tripwire for us.  Stop them if you can and pull back if you need to.  There are some recon units up there to assist you as well.  And Pauli one more thing, your dad will be proud.  You will be one of the first French officers to meet the Germans today.

So looking at the list above, what to do with poor leaders?  They will have a -1 on the maneuver check. There will be a 50% chance that an order issued will not be acted upon due to "fog of war".    Also Pauli must be careful with Lt Corbin because of his dad. 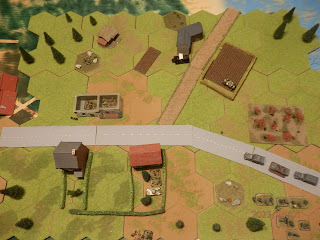 The Arlon valley.  Since the French were just getting there I was able to roll for French set up as per O group.  All but 1 platoon were on the board.  1st platoon set up in the red roofed building nearest german entry.  2nd platoon set up with the good captain across the main road through town. 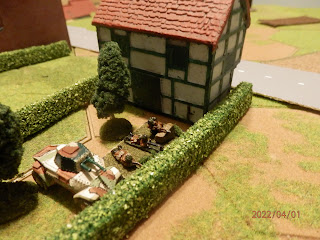 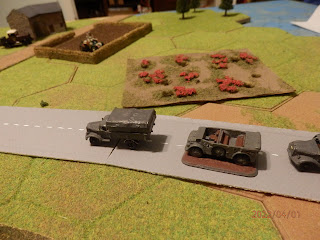 German lorries come up the valley.  They slow as they approach the town.  [ I really need to put a driver in that car.] 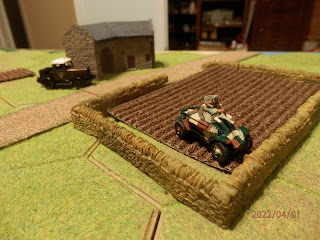 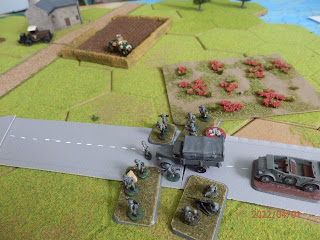 It destroys 1 truck but most of the platoon debusses fine.  [ For those of you following the ATR discussion on TMP, note the german ATR.  It fired twice during the battle doing nothing]   However, surprised at the fierce resistance, 1st platoon retreats away from the armored car. 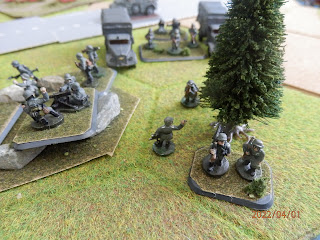 The german commander deploys 2nd platoon to the forest on the right.  They will enflade the red roofed

house.  Meanwhile, 1st platoon reorganizes among the rocks.  Pauli can hear this but can't really tell what is going on. 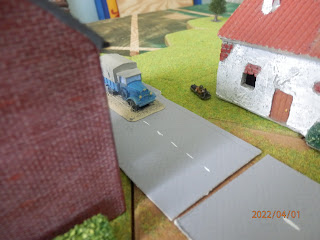 about 15 minutes after the shooting starts 3rd platoon arrives 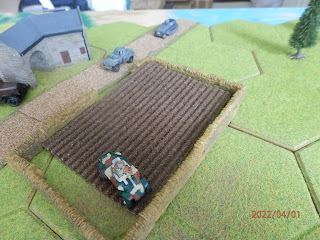 Also german recon elements arrive.  This is not going to help that french armored car! 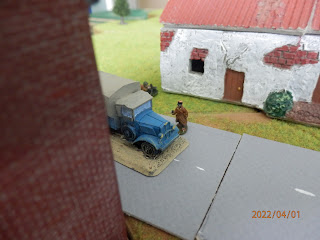 Capt Moulin confers with Lt Corbin.  Lt Dupont sends a runner stating the germans are trying to flank Arlon.  Moulin sends Corbin to the flank and decides to move his CP to the park behind the red roofed buildings to be closer to the battle. 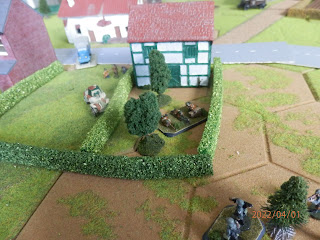 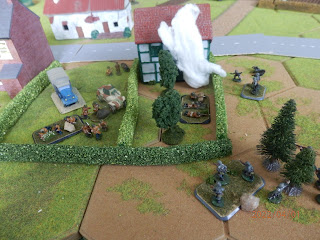 The battle in earnest.  A german 2 platoon attack with smoke from mortars.  Lt Dupont and 1st platoon holding so far.  Lt Corbin debusses. 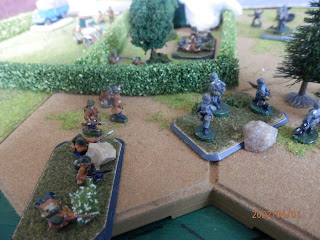 As the germans are pinned down [ pebble behind the stand] Lt Corbin goes on the attack! 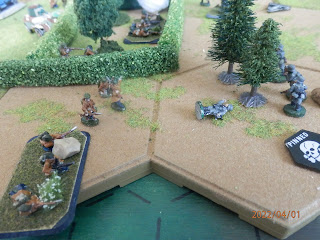 The germans are sent reeling into the woods, their LT dead. 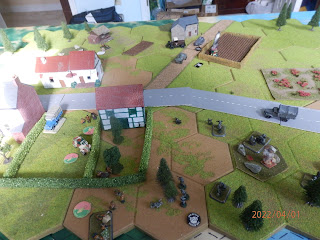 Battle mid game.  French armored car KIA in the field above.  German recon elements push forward into Arlon.  German attack into Arlon repulsed by 1st and 3rd platoons.  German MGs being mortared by french 60mm.  Capt Moulin, in park, pretty pleased.  I got a random event early that upgraded him to average.  That has helped the french flow of orders immensely. 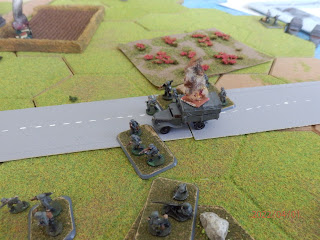 The germans are going to give it one more go.  3rd platoon moves up to Arlon but their trucks are KIA by MMG fire.  The troops will have to walk. 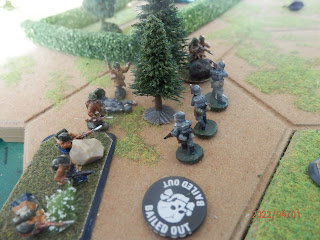 Lt Colbert, flush with his first success, gets greedy and decides to clear the woods with his platoon.  A single squad is there protecting the MGs but they are not pinned... 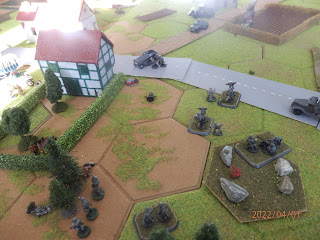 Looking into the left corner of this picture you can see it didn't go well.  Lt Corbert takes the remnants of his platoon back into Arlon.  As the german 3rd platoon hoofs it towards Arlon the recon forces assault into the red roofed house. 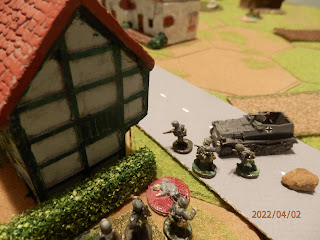 3rd platoon doulble times to help.  the fighting is fierce as Dupont inspires his men... 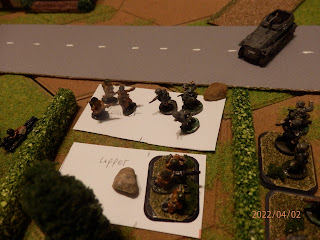 Casualties are heavy but it is too much.  The recon squad gains a foot hold into Arlon.  Lt Dupont retreats back towards the park. 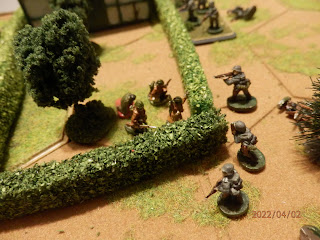 Help will not be coming from Lt Corbin.  He has his own problems as the Germans attack again and his platoon is shattered. 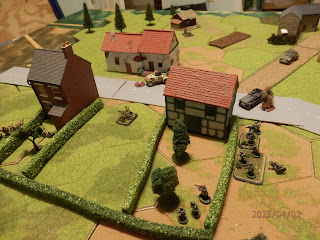 French morale fails and the 1st platoon goes streaming across the park into more buildings.  The Germans consolidate their foothold in the town. 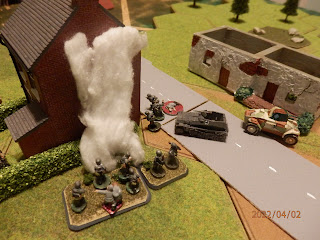 After consolidation the germans again launch an assault.  It is blunted with help from 2nd platoon in buildings across the street. 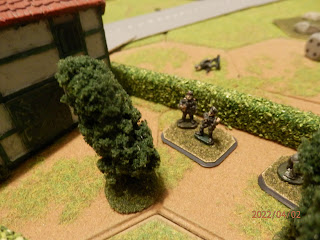 The german CC feels one more push will send the french reeling.  He orders one more assault from his troops. 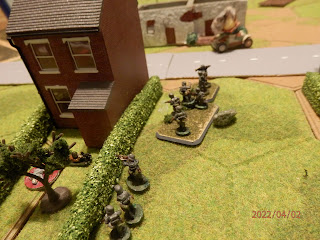 The germans rally right there in the park and charge again! [ note VB thrower in the garden.] 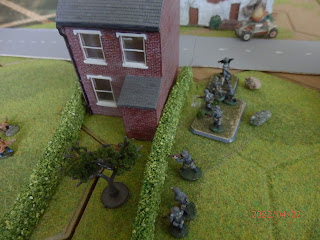 Capt Moulin and Lt Dupont try to fight the rising fear in their men as the germans refuse to leave despite casualties.  Finally it is too much; despite Capt Moulin striking a heroic pose, the men head for the woods outside of Arlon.  They have fought the germans to a standstill for an hour and a half, they will do no more. Capt Moulin gathers his things, sends a runner to tell Lt Boucher to pull back from town and leaves Arlon.

Fun battle!  It took 3 hours but since it was solitaire that wasn't a big deal.  I declared it a minor victory for the French and our good Captain.  The forces were pretty evenly matched though the germans had better morale.  Had they held the town for another 20 minutes it would have been a major victory.  As it was the Germans were sufficiently delayed and bloodied.  Post game I rolled on the AKOT for those of you that know what that is, and decided that is was likely that Capt Moulin would become an average leader.  He made his roll!  The company is in good shape except for 3rd platoon which lost 2 squads.  I will attempt to play the third scenario next which gives the french some H35s and the Germans some stugs  if I don't get distracted.

Posted by FlightDoc at 6:44 PM