After taking the monastery (see first post in December; you should also read Recon at Villa Lardia because I swear this platoon does have bad luck!) the company was placed in battalion reserve. Maj Forester promoted Cpl Barns and he became the platoon sergeant. A Cpl Bristol joined the platoon as a section leader but Red was unimpressed. Red felt much better in leading the platoon and almost felt that "Balls" had smiled at him twice over the last several days. He wasn't smiling now.
"Jerry is counteratacking trying to cut the road forward. Battalion has ordered us to stop then at the village of Ovietto. 2nd and 3rd platoon will take postions here north. 1st platoon will cover the stream west of the town protecting our flank. Red, the bridge there is old and won't support tanks. You won't need and ATGs and we will, so Bob and Paul; you will get whatever we have. If they throw armor at you I will send a tank your way. Red, your platoon did well at the monestary, let's not make that a one time event!
Your leadership:
Lt Red Talbot Gr III
Cpl Paul Bristol 1st section pessimistic Gr I hesitant
Sgt Theo Barns 2nd section and Plt Sgt Narcissistic Gr II
Cpl McNabb 3rd section alcholoic Gr I
Your forces are a platoon of infantry to include a 2in mortar and ATR. You also have a crewed MMG. 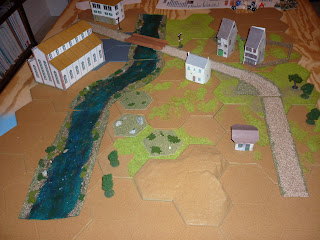 Map looking from german entry
Stream is unfordable
British must set up south of the hill
WHAT IS YOUR PLAN LT?
Red decided to place 3rd section and himself in the houses and trees on the right side of the river to cover the road. 1st section with the untried Cpl Bristol and ATR would set up in the rough ground behind the hill to flank the road and cover any approach by the stream. 2nd section with the Plt Sgt would set up in the church with the MMG ready to cover or move where needed. The plan was to hold positions if possible, if not to fall back across the bridge and make a stand there. I figured Jerry would come down the road with a squad coming over the hill in support.
[ Bad luck starts already. pre game event gives the germans additional armor!]
The german attack had the luxury of being even given their large forces. A hafltrack with 75 mounted followed by a squad came down the road. A squad and Puma came over the hill and 2 squads with halftracks attempted to push through the trees east of the hill. 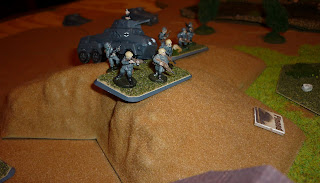 the 2in mortar manages to clear the hill 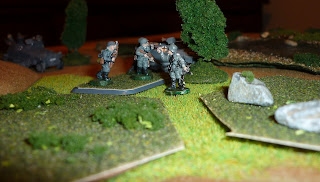 Jerry pushes through the trees minus 1 halftrack and runs
into Cpl Bristol and 1st section
3rd Section fought well but gave ground and the germans aggressively pursued hand to hand combat. Cpl McNabb and 2 men where all that was left.
1st Section also fell into hand to hand combat in which Cpl Bristol was killed. The survivors fled to a house near the bridge. The vickers in the church kept Jerry from following. Sgt Barns realized things were not going well. He ran across the bridge to the house and rallied the remnents of 1st section. At this point the MMG BROKE. Not jammed, broke. [I have never had that happen before. I will spare you the math but that is about a 1% probability] In addition, a runner from company arrives and informs the Lt that Maj Forester is taking a section from 1st platoon urgently as Jerry is pressing in on the north side of town. [another bad luck random event!] Red swears an anglican streak then only sends the assault part of 2nd section; keeping the bren team in the church to make up for the missing MMG. "Tell the Major that I have a Puma 60 yards from the bridge followed by a platoon of grenadiers. My MMG is broke. I trust he will forgive my lack of generosity." said Red to the runner. 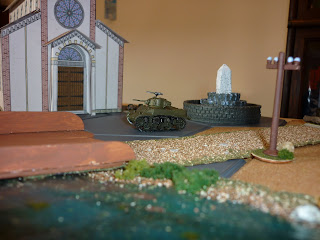 Maj Forester sends a Honey tank
The honey tank blows up the puma but now there are 4 german squads facing the remnents of 1st platoon. 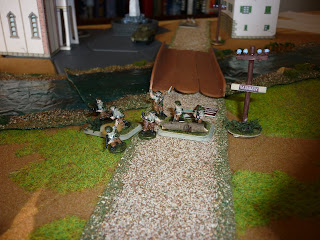 Red gathers the survivors of 1/3rd sections
as they try to make it across the bridge
[At this point I almost called the game figuring Red was done. Decided I would play on a little longer] Red gets his troops across with the help of the honey's MGs. They hole up in the Church and the building across the street. 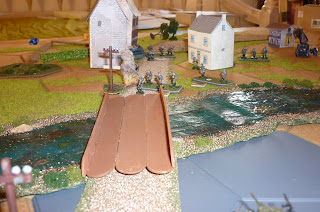 The honey, 2in mortar and bren kept 2 german attempts at the bridge from succeeding! 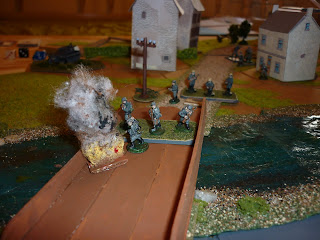 [At this point I almost called the game because I figured Jerry couldn't win. Then the mortar ran out of ammo] the 75mm halftrack managed to drive back the honey and the germans rallied 2 squads for one more push at the bridge.
Red was in the church with 3 soldiers praying for more mortar ammo would show when he saw 20 coal scuttle helmets make another run for the bridge and bullets hammered his position. "Bloody fire men!" he screamed though he knew they were doing all they could. 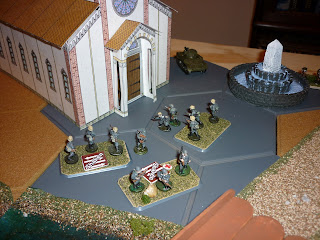 Final assault into the church
They stopped many germans but 8 managed to get into the church. Unfortunatly they had a MG-42 and a fearless maniac [ hero; another random event] with an unlimited supply of grenades. It was only a matter of time before more germans entered. Red gave the word to 3 grateful tommies and they slipped out the sacristy entrance.
Great battle even though Red lost! I still think the dice are stacked agaisnt these guys unless Maj Forester shows up. The platoon lost 5 KIA (including Cpl Bristol) and 9 WIA. "Balls" did not say much to Red afterwards. There are not enough replacements so 1st section will not be reconstituted yet. In addition, Sgt McGregore, really dislikes Red now since Red blames much of this debacle on McGregore's MMG failing and McGregore's team "leaving the church to get the gun fixed".
German Forces
4 Panzer grenadier squads (don't forget they have 2 LMGs)
4 Gr III leaders
1 Puma, 1 Halftrack with 75mm gun (think it is a 250/9) 3 Halftracks
Enter north edge of board
British reinforcement 1 Tank on turn 5. 1-3 Honey 4-6 Chruchill or Sherman
Special rule
Bridge is rickety. Halftrack can cross on d6 1-3. Lt tank on 1-2. Medium tank of 1.
Enjoy and Happy Holidays
Joe