Finished painting 2 squads of american paratroopers last week so you know I had to do paratroopers last weekend. I had to roll up a new platoon. Since multiple people have asked about platoon forward on TMP and other sites I thought I would take this opportunity to explain a little how it works since I had to start from scratch with my new band of heros.
I usually have 4 personalities per unit. To have more dilutes the experience for me unless you get an unforgettable character like Maj Forester in Sicily! You roll up the person's temperment, motivation and leadership skill. This gives you an idea of who he is. For our new platoon:
Lt Topolski pragmatic/glutton Gr III
SSgt Lowry addicted/revenge Gr II
Sgt Kellogg Likeable/government Gr II +1
Sgt Mackle Generous/ government Gr I +1
Some temperments give you modifiers to tables. For instance Sgts Kellogg and Mackle are nice people. Personalities will come out over the course of your campaign but these tables are a start. For instance, we can already see that Lt Topolski likes to eat, Sgts Kellogg and Mackle believe strongly in the government and SSgt Lowry has a pathologic hatred for germans!

Next you roll up your mission. This unit is at the beach at Anzio. Historically they held the right flank and were on the defensive. We roll on the defensive chart and get "hasty defense". This scenario has 3 posibilities. However, it is late and I don't feel like playing a big battle so I chose not to play that scenario. Instead I pick a short one; "patrol". The terrain on the right flank was not mountainous across the canal so I will pick the "moderate" terrain chart. I was expecting some farmland with 1-2 buildings. What do I get? 2 key buildings with a forest on the right flank and a road down the middle with water at my baseline with one additional bulding at the baseline! I don't want a river so we will go with swamp. I only have 1 swamp painted up so this will be a small swamp! The key building in the middle will be a villa and we will make the other key building a warehouse. My final board is shown below. 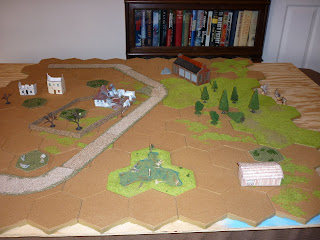 Area to be patrolled. Woods on right, villa in
center and barn lower right.
Next you pick your forces and set your plan. We will take both our manuver squads but leave the LT home. (The enemy forces are proportional to your forces to keep the game balanced)
SSgt Lowry will avoid the swamp and the road. He will advance up the right past the barn into the woods. He will then send Sgt Kellogg into the warehouse and then over to the villa. After that they will withdraw after setting boobytraps in the villa. 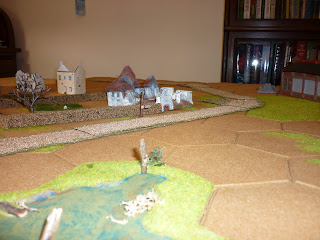 Looking past the lonely swamp to the cool villa
where I thought the battle would take place!
Several dummy markers enter the board. Only 1 of which will be an enemy patrol. As luck would have it the enemy patrol consisted of 2 grenadier squads and they were in the woods pushing towards the barn as our heros left the barn heading towards the woods. This great board set up and I am only going to use a quarter of it! I could have overrode this and moved the battle to either the cool villa or the warehouse but decided I would play it out. (I told you I report all this stuff on the blog honestly!) I will let SSgt Lowry pick up the narrative.
I had 2nd squad out in front advancing towards the woods when suddenly machine gun fire errupted from the woods pinning Sgt Kellogg and his squad. 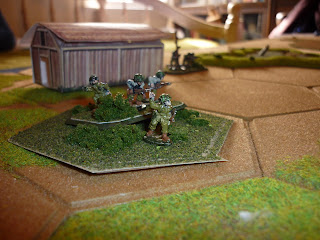 2nd squad and Sgt Kellogg advance
past the barn moments before ambush
I set up the LMG in the barn and had the assault element of 1st squad attempt to flank the woods by going left but they were driven back by accurate fire. Sgt Kellogg rallied his troops several times and attempted to charge the woods but was unsuccessful. 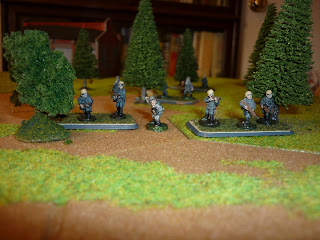 Jerry's in the woods
(First figures I ever painted. Guess you can tell)
Suddenly an additonal squad appeared on Sgt Kellogg's right and I could not provide covering fire. These MGs quickly wounded 2 men and killed the BAR gunner (Pvt Donner) The Jerrys then advanced to within 20 yards and 2 of the men started to run when Cpl Mullens ran over, picked up the BAR and, while standing, emptied 2 clips into Jerry. This broke the attack, steadied the men and allowed Sgt Kellogg to withdraw back behind the barn. At this point our #@%$ LMG was broke so we withdrew. Jerry did not follow. I estimate Jerry lost 5.
During the battle random events can happen like reinforcements or heroic deeds. Cpl Mullens drew a heroic deed and rallied his squad and then added addiitonal firepower the rest of the battle!
After the battle we had to generate Cpl Mullens as he might be important later. Then you roll for two events that happen to the platoon. These are modified by many factors. Our two events were; 2nd squad's morale went up permanently due to Cpl Mullens and Lt Topolski met a non player character named Lt Sheets who is an artillary forward observer.
Hopefully that gives you a taste of Platoon Forward! The forces for Patrol over Mussolini Canal are:
US
2 airborne squads; 1 with a LMG and elite morale, 1 with a BAR normal morale
German
2 panzergrenadier squads
1 Gr II leader
1 Gr I leader
Object for both sides is to patrol the board. If you encouter enemy forces give better then you receive and make the enemy withdraw.
Special rule
For those that read my initiative article in the christmas lardie special; the paratroopers have the iniative. for other systems allow the paratroopers to either move first or last; their choice.
Enjoy
Joe

Posted by FlightDoc at 6:19 PM