Bomber in the bazaar

Finally played a more traditional Grunt's forward battle for my blog than I have done recently.  I used a platoon out of the 10th Mountain Div in Afghanistan.  I run many platoons but some platoons very quickly develop character and storylines and this is 1 such platoon.  I decided to focus on 1 squad and have the rest of the platoon NPCs.  They have only had 3 battles but a lot has happened.  The LT is mercurial so is immature.  He can be a nice guy but since he is inconsistent the NCOs try to keep him at bay to protect the rest of the platoon.  The leadership at the SL level is average but as expected is weak at the fireteam level.  For the 2nd FT of the first squad ( the squad of my focus) CPL LaBell was so bad the morale dropped and Sgt McMann was trying to mentor LaBell until the Corporal was killed.  Morale  improved and Lt Richards was on a run with Sgt McMann when the convoy was ambushed.  1st squad performed very well and the US beat the ambush without loss.  Lt Richards was impressed so when a tasking came down for a cushy 4 day assignment in town providing security for a bigwig meeting he gave it to Sgt McMann and first squad.  [ Now you are all caught up!]
Eagle-3    1 US squad  8/8
Characters
Sgt McMann  former fisherman  Cheery/ wealth     Avg ldr    squad +1 towards him
1st FT Cpl Adams  orphaned ranch hand  jovial/ religion   poor ldr   FT +1 towards him
2nd FT Cpl Anderson  son of a miner   idealistic/ wealth   poor ldr   1st mission as FT lead

The last 2 days had been great!   They set up a cordon during the day in front of a hotel as some bigwigs met with some muhla types and actually slept in beds at night.  There were even some SF guys around in case things got bad.   The LT actually helped them out this time.
Today their orders were different.  It appeared the conference had ended early.  Sgt McMann didn't know if that was good or bad for national security but did know they were suppose to patrol a bazaar near the hotel.  "Just walk around a smile.  Show the people that the government is here to protect them.  And keep an eye out for anything suspicious." the captain had told them.

He didn't like this assignment much.  Walking around in a crowded bazaar seemed like a good way to get killed. 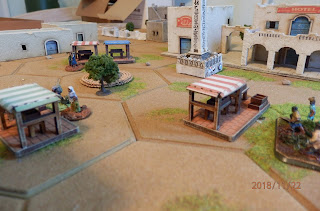 The bazaar looking not too crowded 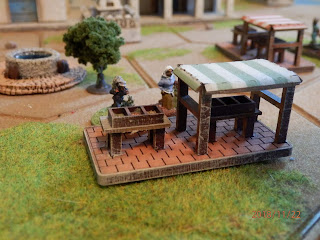 Local shoppers elbow their way to the stalls.

Suddenly his earset crackled to life, " Suspected suicide bomber enroute to bazaar.   Eagle-3, clear civilians from bazaar and neutralize bomber if found.  Avoid civilian casualties.  Deadly force authorized only upon positive identification.  Eagle-5, provide support to Eagle-3."  Now he really didn't like the assignment!
With no time to lose he sent each fireteam down 1 half of the bazaar with their ANA interpreters in the lead trying to tell the throngs to leave the bazaar.  [  Force on Force has great rules for this.] 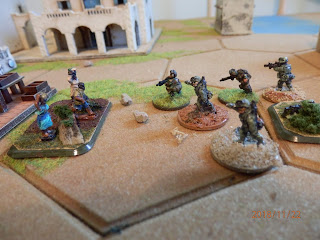 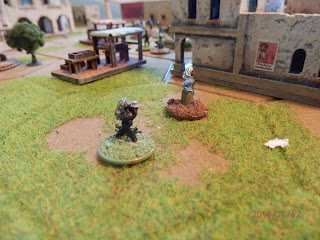 2 of the 3 groups of civilians are cleared before the bomber enters the bazaar.

The bomber is positively identified by a SF sniper on a nearby roof  (eagle-5) who misses the shot.  Cpl Anderson feels his team has a clear shot and orders his team to take it. 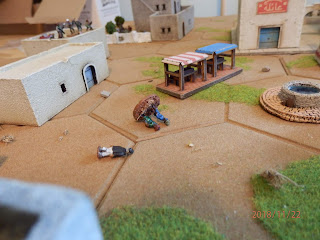 The good news, 1 dead bomber.  The bad news, 1 dead civilian.    You can also see some rebels on a roof in the background.  Rebel fighters had started to surround the bazaar.  With shots fired they came into attack. Sgt McMann's squad is now outnumbered 4 to 1 and in the open.  Time to retreat! 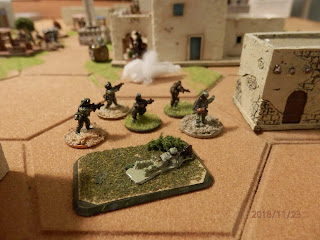 So the squad begins to leapfrog back towards the hotel.  The SF sniper team joins.  Sgt McMann calls for a show of force airpower but nothing is coming soon. 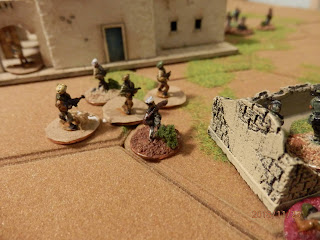 Cpl Anderson is pinned down in a building so the rebels rush in.  Cpl Anderson keeps his head and orders an orderly retreat.  There will be no rout today! 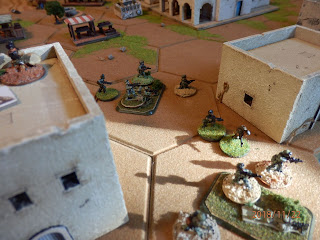 The entire squad makes it off the board without loss!   By points this was a US win but I called it marginal since they were run off the board and caused a civilian casualty.  Still they didn't lose anyone.  Very fun game that took an hour.

Post battle the squad now loves Sgt McMann and their morale goes to 10 when he is around.  2nd FT was also impressed with Cpl Anderson.  I would have put Anderson in for a medal for shooting the bomber but killing a civi kinda tarnishes that.  Sgt McMann missed his leadership roll so he is still average.  Back at the barracks, Cpl Rendon from the heavy weapons platoon approaches Sgt McMann.  While embarrassed, he explains that on his last mission he lost a cross that his mom gave him and knows he will die if he doesn't get it back.  Any chance Sgt McMann could go with him to the spot where he is sure he lost it?  What answer but "yes" can our hero say?  [ I told you this platoon is generating a lot of great stories.  This is certainly Platoon Forward at its best to me.]