Hope everyone is well.  I reached 3 milestones this weekend. First my youngest turned 19; hence I am really old!. Second, I tried out custom Fog of War decks that are nation and war specific.  Thus the free world forces now have their own FOW deck for my Vietnam games.  The US player will rarely have equipment break compared to the french or ARVN but his troops will be more brittle.  If this works I will probably try to sell them on wargame vault for $1 per theater-- let's see if they work first.  [ proceeds will go to the local food bank as always.] Third, I allowed someone other than myself to control one of my platoons.  My son, home from school saw me setting up "ambush along route 6".  I invited him to play and he actually said "yes!".  Because of this I only took 4 pictures but the narrative is pretty good.

The company commander patiently explained to the Lieutenant that the regiment had decided to start opening up route 6 in the delta.  He was to lead a "thunder run" as the americans called it, and go looking for trouble by springing an ambush. " Push through the ambush but then stick around to fight and defeat them."  He would have a light tank attached in case their were mines. 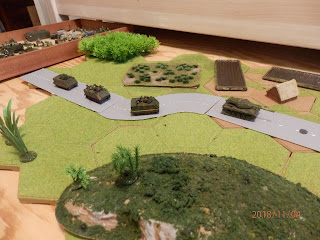 Everything fine at the moment!
Order of march is 1st sq, HQ, 2nd sq

Suddenly rifle fire and grenades are everywhere around the column!  Duc can barely peek his head above the lip of the carrier to see.   The tank guns it and drives down the road; never to be seen again!  Coward!, shouts Duc.  [ cool FOW event!]  First sq rotates to face the hill where the heaviest fire seems to be coming from.  Looking back, second squad takes off away from the fire into a field. ( they failed a morale check.) The LT decides to turn the track around and fire the 106 RR. 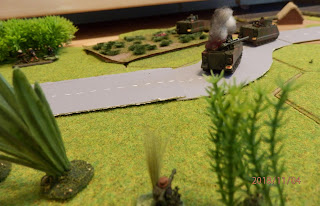 BOOM!
A rifle grenade hits the back door and penetrates.

Lt Nguyen piles out of the M113 and collects his men.  1 is bleeding badly but no one else is hurt.  He retreats to the rice paddies. 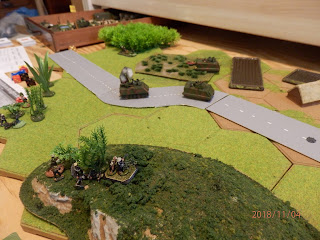 Sgt Dao meanwhile recovers his wits and manages to destroy a RPG team in the nearby jungle.
The Lt radios for air support while Sgt Pham trades fire with the VC on the hill.  After 1 of his gunners is seriously wounded he too retreats into the paddies... 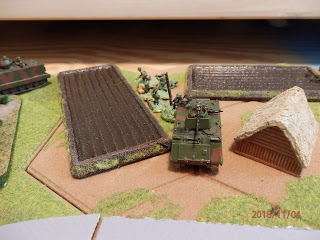 At this point the LT has pulled his forces back at least 60 yards from the VC so he outranges them.  Knowing some type of reinforcements will soon show the VC break contact.
1st platoon sustained 1 KIA and 2 WIA and lost 1 track that was recovered and repaired.  Charlie had 3 KIA.  However, since ARVN didn't control the battle field we declared it a Viet Cong victory.

Great game that was completed in just under an hour.   Post game Lt Nguyen calls the armor officer Lt Qui who is a devout Buddhist and inept military man to complain about the tank's actions.  He agrees to discipline the crew and volunteers to personally accompany the platoon on their next mission to make amends.   In addition, 1st squad, having sustained 2 WIAs, is not happy with Sgt Pham's leadership and they move to -1 towards their squad leader.
For those of you that want to try this Grunt Forward generated the following for the VC
1 mine, 2 squads + 1 RPG, 1 RPG team, 1 75mm RR, 2 Avg leaders.

Of course the best part was sharing the experience with my son--- priceless.

Posted by FlightDoc at 6:44 PM