Second mission with my Phantoms

Readers of this blog should not be surprised that my next game played was not Sgt Bomba but with Capt Johnny doing yet another MIGCAP over North Vietnam.  Please look at June 27th for his last mission and a write up  of "double dimes".

Johnny and his backseater had gained a little notoriety following their Mig kill.  Unfortunately since it had been a radar guided missile fired at the beginning of an engagement no particular lessons were learned.   Still people now thought of him as a "tactics expert".

MIGCAP over NorthVietnam escorting thuds bombing some oil tanks.     I have thuds painted up now and have made up some encounter charts for MIGCAPS.    This will be a playtest.   The doubledimes will still send a flight.  This time the 2 unpopular pilots sit while Rattler and Joey fly.  They will form an element while Bruce will slide over to be johnny's wingman and learn from the master. 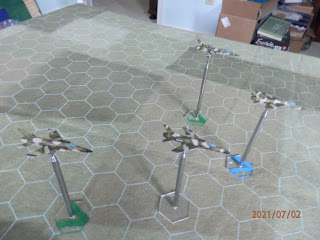 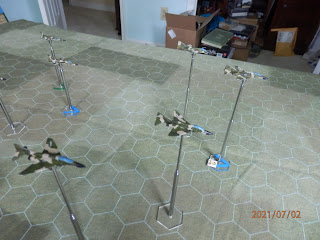 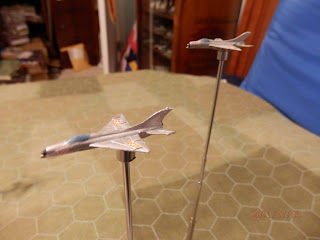 I roll up 4 Mig 21s and the Migs have the advantage. [ probably from their ground control.] 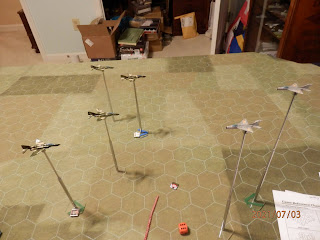 The Migs formation is 2 plus 2 in trail.  The first 2 start to work their way around Buick flight. 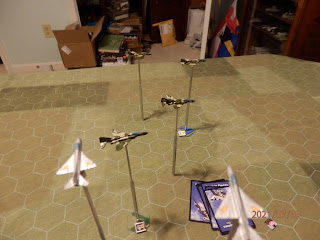 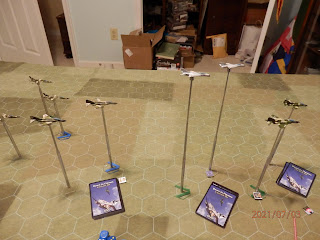 Rattler and Joey are quickly and trouble.    Johnny tells them to keep calm as he gets on the Migs' 6!

the Thuds rumble on! 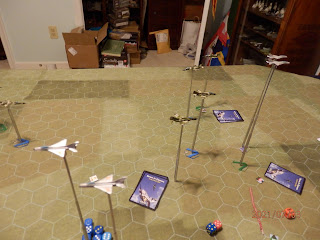 The Mig's see the sandwich when warned by their trail and work to extricate themselves.  Unfortunately the trail goes after the thuds.   Johnny tells Rattler to stop them! 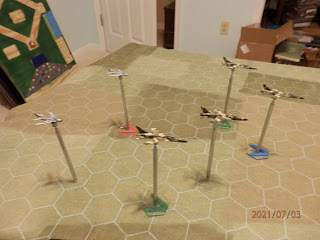 Just when you think things couldn't get worse 2 Mig 19s pop up behind the Thuds.  [ 33% chance that.  might have to work on these tables some more.] 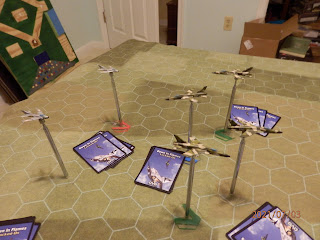 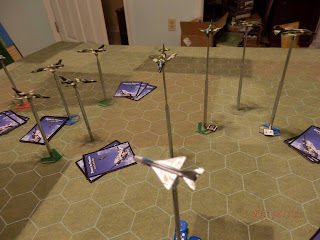 Rattler and Joey bore in to the trail Migs.  [ historically the trail Mig was the lead shooter.  Here he is the only average pilot.  Rattler doesn't know that yet.] 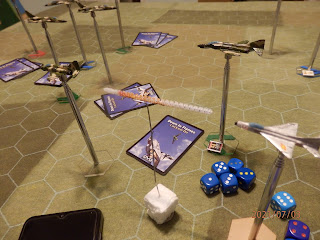 He knows it now.  The Mig pilot quickly gets behind Rattler and lets loose a missle...

It impacts right by the cockpit.  No chutes are seen by the stunned Joey Armanda. 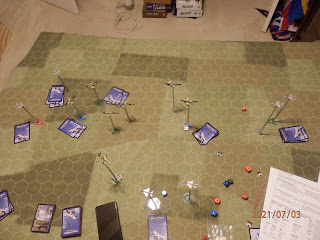 Mid game.   2 thuds continue to streak towards the target mid left.  2 thuds parry with 2 Mig 19s.  Joey now has his hands fill with 2 Mig 21s bottom.  Johnny and Bruce are neutral to 2 Migs middle of the picture as they swirl with neither gaining an advantage. 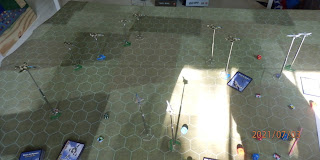 Next turn.     Joey climbs and gains distance from the Phantom killers before turning around now in radar missile range.  The Mig 19s, having missed the ambush, leave.   Johnny and the 2 original Migs continue to burn gas in the sky. 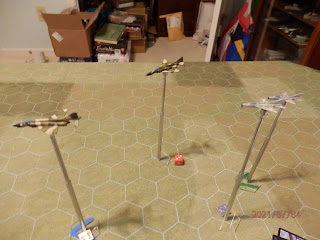 To Johnny's horror the Mig gets on his 6!.  He twists and turns his phantom.  What he doesn't realize is that the Mig achieved a lock on and fired a missile here but the missile turned out to be a dud. [ 30% chance that.] 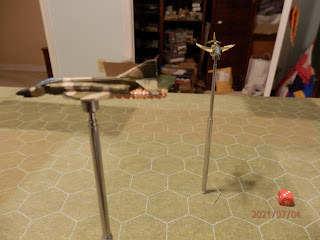 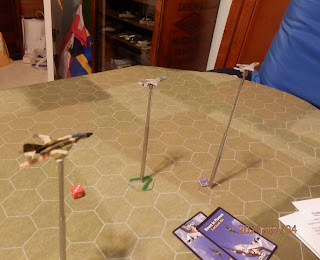 It works and soon Johnny is right back where he wants to be! 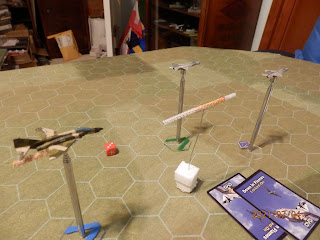 The Mig pilot turns right before impact and the missile explodes near the Mig.  The engine starts to smoke but it doesn't go down.   Rats thinks Johnny. 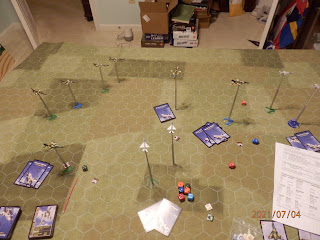 End game.    Joey is holding his own but can't achieve a lock on.    The damaged Mig and wingman escape into the cloud deck.   The air battle is over almost as fast as it started.   Poor Rattler; RIP.   But the mission isn't over... 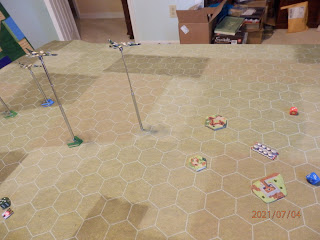 2 Thuds with bombs come in low to bomb some oil tanks!  The flak is intense but surprising clear! 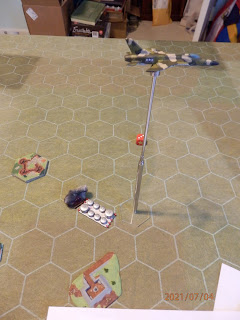 Thud 1 hits the target but reports lose of fuel after going over the target.  Can make it to Laos but not home.   Thud 2 hits target... 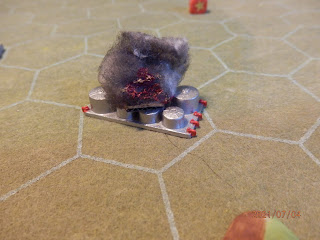 Target heavily damaged!    Should be out for a while but at what cost?

Great game that took a while with some many planes in the air.  I declared it a loss for the squadron.  Rattler for a damaged Mig even with the loss of no Thuds.    Obviously need to playtest these table some more but it certainly was challenging.    Post battle Lt Bruce Lawson makes his roll and becomes a veteran pilot.  He informally takes Rattler's place as johnny's #2.  Rattler is not replaced yet nor is the plane.  The squadron commander, LtCol Glasson has decided he is going on the next mission.  Should be fun!