The Ambush of Calcaneus

So I have continued to play Saga Age Of Hannibal and started a campaign with Age of the Wolf a version 1 product that I thought was brilliant.  I actually started some campaign rules for SAGA called "Barbarian Forward" but once Age of the Wolf came out shelved them as they were not needed.  I am using four factions: Romans, Carthage, Gaul and Greek states.  All the leaders will be named for bones of the foot/ankle [ orthopaedic humor!] and will start out with 5 units instead of 3. I have also heavily modified the battle table to include more potential scenarios.  Finally I have doubled replacements since my battles are always very bloody.

Calcaneus of Rome, Comes from a wealthy family and is a war hero.  Rome's motivation is to gain land.

Hampton of Rhodes Carthage. [ okay not a bone of the foot but I live in Hampton Roads, VA.]  Experienced General and also a war hero.  Carthage also wants to gain land.

Phalanges of Gaul.  One of the senior kings and leaders of the Gallic nation.  Well respected by friend and foe.  Reputation is everything for him.

Talus of Syracuse.  Haven't rolled him up yet as he is awaiting his troops from Old Glory 15s.

For the first season Calcaneus  and Hampton chose to invade each other.  Phalanges decides to raid Roman bases in Gaul.  Talus sits this season out.  The first battle played out is the Scouts scenario between Calcaneus and Hampton.  It is close but Carthage wins with most of the Roman levies destroyed.  Post battle Calcaneus is able to rebuild his skirmishers and recruit more german bowman giving him 9 bowman from his original 12.  The next scenario is ambush.  I decide to try Forest ambush which is very hard for the ambusher to win as all the ambushed have to do is exit their warlord.  I change this to the warlord is worth 5 points instead.

Before each game I will try to introduce a leader.  Today it is Calcaneus of Rome. 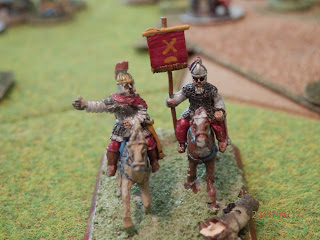 Calcaneus has military experience and is a recognized hero thus he generates an extra Saga die.  He also often will get to pick if he is the attacker or defender and starts with additional wealth.   The Roman battle board is infantry specific and legion specific so with my 5 points 1 take 1.5 points of heathguard legionaires.  1 point of regular legionaires.  These will be my backbone.  1 point regular cavalry, 1 point local bowman and 1/2 point of velites.

In the first battle my velites are destroyed along with most of my bowman.  I am able to build them up and replace loses to my legions.  Now there are rumblings  in Gaul so Calcaneus is ordered to take a cohort up into Gaul to reinforce roman forces there.

Calcaneus tried to be philosophical about everything. He had had set backs before but not while in command of so many men.  He hoped he would have a chance to prove himself in Gaul.  He hated fighting the Gauls.  They were physically imposing and ferocious.  It took discipline and planning to win. 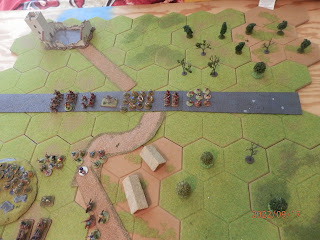 The board with the roman order of march.  The Gauls aren't set up. 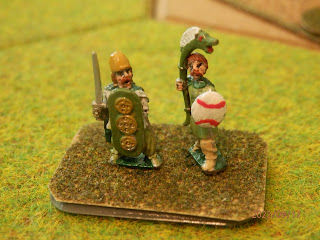 Phalanges of Gaul [ one of my early paint jobs about 10 years ago.] 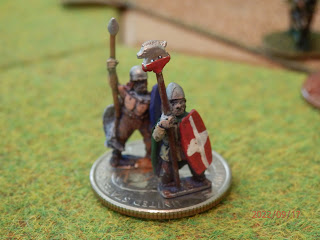 Not finished yet but as a well respected leader Phalanges gets a war banner to start the campaign. 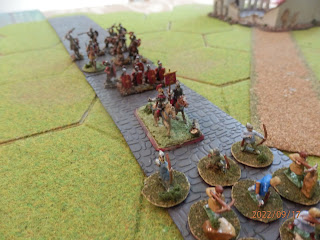 The roman column on the road.   [ I didn't have enough gaulic archers for both the gauls and the romans so the romans had a few crossbowman tossed in.] 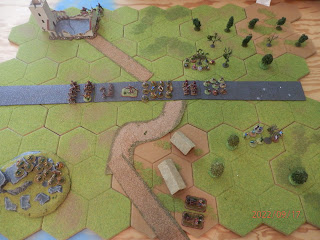 The Gauls in position.  To win they have to crush the Romans during the first 2 turns before the romans can react. 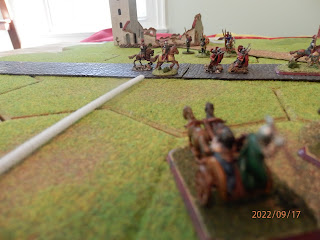 Suddenly, behind Calcaneus a flurry of arrows cuts down much of the calvary.  Simultaneously Gaulic calvary appear to his left and chariots to his right.  Ambush! he cries. 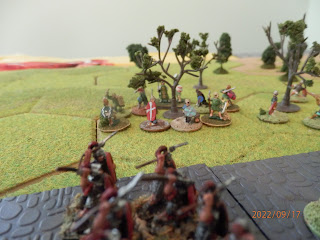 German infantry waiting for the signal to attack... 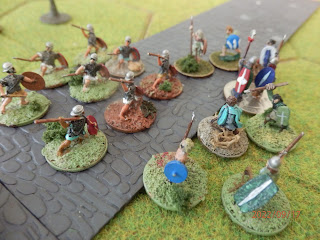 Gaulic warriors attack the front of the column cutting down half of the velites. 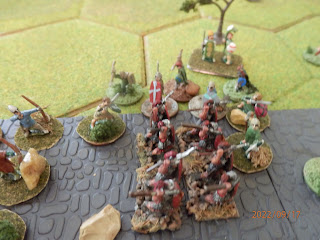 The regular legion is shaken and takes heavy losses when their turn arrives. 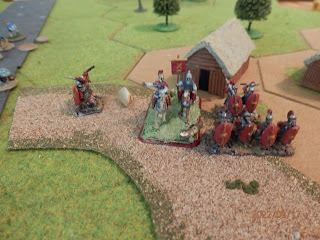 With only 2 Saga dice the romans are stunned.  Calcaneus manages to move the elite legion and survivors at the head of the column toward the village in hopes of making a stand. 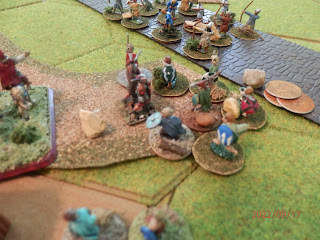 Phalanges, smelling a rout, pushes his troops forward.  The germans charge the battered legion outnumbering them 3 to 1... 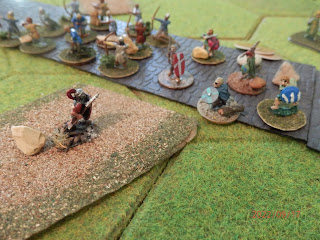 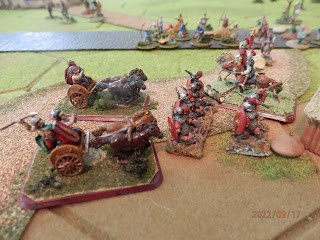 Meanwhile the chariots charge the elite legionaires causing casualties and forcing them back.  Javelins are being throw at Calcaneus. 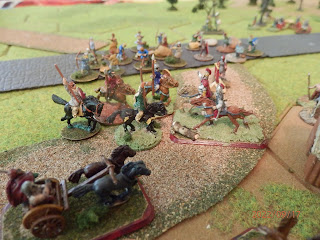 Next the German cavalry attack Calcaneus and his staff.  Calcaneus [ remember he is a hero] fights them off causing heavy casualties. 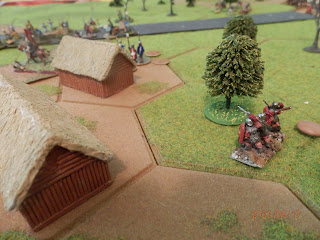 The Romans are up to 4 Saga die but have few units left.  The elite legion makes a break for it through the forest.  This will protect them from the chariots.  The german archers keep up a steady stream of arrows at the infantry and slowing whittle them down.  Calcaneus can't follow the legion on his horse so makes a break for... 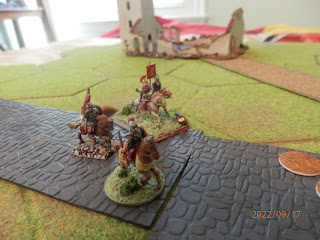 the remnants of the roman cavalry.

Phalanges rolls all common saga dice therefore can't activate his archers to fire at Calcaneus and his cavalry.  [ Must be low on arrows!]  His warriors are battered and his chariots throw javalins at the retreating legionaires in the woods.  In frustration... 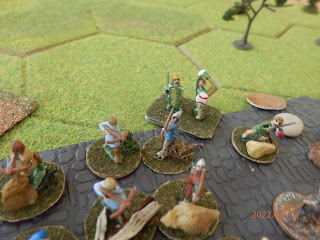 he charges the german bowmen and leaves a wide path of destruction!

Still the elite legion leaves the board as do the surviving velites.  Finally Calcaneus... 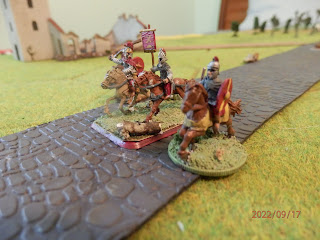 turns and leaves the ambush site with his cavalry.

Wow.  Calcaneus felt terrible as he made his way to the camp.  But he was greeted with amazement that he had survived.  Within 5 hours it was apparent that half of the elite legion and half of the levy troops had also survived.  Only one manipule had been destroyed.  Calcaneus was being congratulated for his cool leadership under duress!

As far as casualty points the romans only caused 6.5 while the Gauls caused 13.  But the Romans got 6 points off the table plus Calcaneus which was worth an additional 5.   Post Game Calcaneus is able to rebuild most of his forces except his cavalry.  His levy are also a little light as word apparently spread that german bowman don't last long in roman service!  His event gives him an additional 4 warriors which he uses to start building an additional legion at the expense of re building his cavalry.  In addition he gains one land plus his one new unit grants him a power score of 15.  This means he can now buy a war banner for his legions; too cool!

While Phanges lost the battle he lost few forces.  He is back to full strength and is able to recruit a new band of infantry as news of the successful ambush spreads through Gaul.  Now should he hit Rome again or set his sights on the Iberian peninsula and the Carthaginian forces there?

Posted by FlightDoc at 5:25 PM